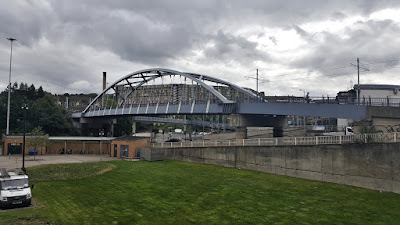 Park Square Bridge is one of several bridges built for the introduction of Sheffield's Supertram system, completed in 1994/5. This tram system's three branch lines converge in a delta junction just to the west of Park Square, and this bridge carries the western branch above Park Square roundabout and up onto Commercial Street (hence the bridge's other name, Commercial Street Bridge).

Alongside other major Supertram structures, the bridge was designed by Sheffield City Council's in-house team, Design and Building Services. That seems barely imaginable today, it's hard to think of a UK local authority with the capability to design such a major structure any more.

The bridge spans 75m (with two smaller approach spans making a total length of over 100m), and was built by Balfour Beatty, with steelwork by Watson Steel (now part of Severfield).

The main bridge span is a bowstring arch. Inclined steel arch ribs are braced overhead and tied with steel girders, which form the edge members in a ladder-deck arrangement. The bridge deck is a 250mm thick reinforced concrete slab composite with the ladder-deck crossbeams. The deck carries a non-structural concrete slab, containing the tram rails, drainage channels and stray current protection system. The deck is suspended from the arch by 60mm diameter steel hangers.

Although the three spans are each simply-supported, the structural deck slab is continuous, to avoid leaking joints, and a paper on the bridge design states that there are "concrete hinges" in the slab above the piers.

The superstructure sits on reinforced concrete piers and abutments, with concrete blockwork cladding, and these are supported on piles down to bedrock. The design language is a little post-modern, I think, with an elaboration of detail and a type of mock-classical architecture that seems at odds with the high-tech or modernist sensibility of most bridges of recent decades.

The bridge span was driven by the highway layout and the presence of a large culvert below ground. However, Supertram planners were also keen to have a "gateway" structure at this prominent position. A cable-stayed alternative was considered but rejected. The choice of a bowstring arch allowed a low construction depth to be employed, minimising the length of approach ramps.

The designers sought to maximise maintainability by avoiding closed structural sections, so the arch rib is a channel section with the open face downwards (similar to another bowstring arch the other side of the Pennines, in Salford).

According to the paper, "careful treatment" was given by the designers to the parapets and to the anti-climb blisters on the arches. The latter are pretty horrible looking, but not enormously so given the scale and clarity of the rest of the bridge.

The arch ribs are pin-ended, which I find really quite odd. Are there other modern bowstring bridges with this detail? The design paper offers no explanation for why this choice was made. It isn't visually incongruous, but I think hinges should generally be avoided in main members of bridges unless there's a very good reason.

Behind the hinges, there are thrust blocks comprising a group of vertical steel stiffening ribs, which transfer the arch thrust into the end node of the tie girders. As you can see in the photograph, they double as a handy waste receptacle.

On the whole, I think this a well-designed bridge, generally with clarity of form and well-proportioned. It is, however, let down by some of the detailing, and not only the impromptu waste-bins, the lumpen parapets or the blisters.

There is a pastel colour scheme used to distinguish between a hierarchy of components, both the hanger assemblies and also the connection of these to the tie girders, which for my taste has been over-elaborated. The use of this number of pale colours is not very successful, as they are simply impossible to distinguish under most lighting conditions. A smaller number of complementary colours would have been enough.

The bridge was the winner of an ICE (Yorkshire) Award in 1994/1995, and Commended in the National Steel Design Awards.

Posted by The Happy Pontist at 8:02 PM

I was a graduate in SY County Council, and was supervised by the responsible engineer (Howard Jones). He always worked hard to produce well thought out bridges, and some of that rubbed off on me!
When Margaret Thatcher abolished our employer, I moved to Sheffield Uni, and Howard went to Sheffield Council to design this bridge (among many others).
A few years later, and I returned as Lecturer in Structural Engineering at Sheffield Uni, and one of the bridges I introduced the students to was this one. I have to say I was satisfied with this design. Parapets and waste bins are so often and afterthought (and usually beyond the control of the bridge designer!).
I take my hat off to Howard who managed to produce this (and others in Sheffield that have stood the test of time.
Sheffield Square was a great place to introduce students to many different bridge forms. They loved it (as their coursework clearly showed), and some never forgot it (they told me years later!).
Thanks for the reminder of happy days ….. but now I am in Melbourne half a world away (but part of me was formed and still loves the old place I made home for nearly 8 years. David Morris