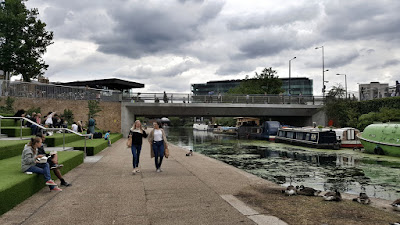 This time, I'm covering the nearby King's Bridge, a designer highway bridge providing access to the same area.

The bridge spans Regent's Canal, and was designed by Knight Architects with Arup (initial design) and Peter Brett Associates (contractor's designer). It was built by BAM Nuttall, with precast elements by ABM Precast (prestressing by CCL).

The bridge deck comprises thirteen 26m long precast beams spanning 23m, which unusually for a highway bridge in the UK are post-tensioned rather than pre-tensioned. This appears to have been driven by the required site levels, resulting in a very limited construction depth between the highway and the canal clearance envelope.

What I like about this bridge is that it shows how easy it can be to create something substantially better than the norm. The bevelled edges to the abutments and edge beam are enough to create a picture-frame effect, all crisp and clean geometry. Unsightly stringcourses are eliminated, the bridge is made to appear sculptural, monolithic, rather than the assemblage of pieces that it really is.

Attention to detail includes the ribbed finish to the underside of the bridge deck and to the faces of the abutment. As well as ensuring a consistent appearance, this eliminates the large concrete surfaces which might otherwise attract graffiti. It's a small but significant signal to towpath and canal users that somebody actually cares about their environment.

The need for quality is evident from a short walk around the area. A set of astroturfed benches spills down to the canal right next to the bridge, and on the opposite towpath there's a canalside cafe. It's a popular place to stop and sit, at least in good weather. I believe a further crossing is planned at low level to connect to the two towpaths in the future.

Another positive feature on the bridge is the use of non-standard parapets. I'm not sure what the source of these is: are they custom-designed or off-the-shelf? Whatever the case, they're not the bog-standard type.

The metal mesh screening emphasises that they are part of the urban realm, not just an edge barrier. If I have a criticism, it's simply that the geometry of the mesh is rather boxy, making the parapets visually more prominent than they maybe need to be.

I think there's an entire book to be written on the subject of bridge parapets. They are one of the most highly visible elements of a bridge, yet on too many occasions an afterthought.

As with the Somers Town Bridge, what strikes me most about King's Bridge is the contrast between its careful and un-showy appearance, and the amount of work the design team have put in. It takes effort to make something look so effortless. 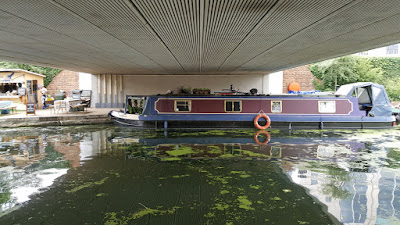