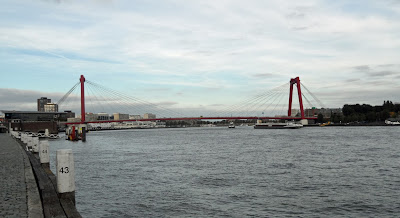 Of all the bridges I saw in Rotterdam, this last one is easily my least favourite. There's just something about it that is really, really boring. Apparently it won a Dutch Steel Award in 1983. I guess it must have been a quiet year. 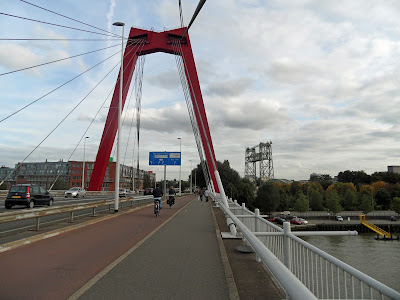 Spanning 270m, and 33m wide, it is no small structure. When it was completed in 1981 it replaced a truss bridge dating back to 1878, which was also no small bridge. 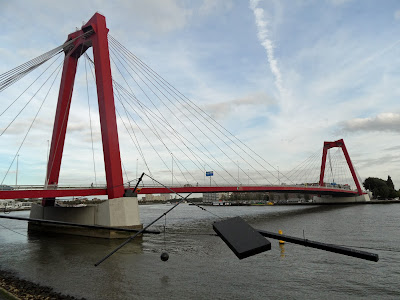 The cable-stayed bridge form is one which offers designers considerable opportunities for creative input, so it's particularly disappointing that Willemsbrug makes so little use of this freedom. It's the towers, always the key feature on a cable-stayed bridge, which are the problem. Most cable-stayed bridges use a variation on either a portal-frame tower (sometimes H-shaped), or an A-frame tower (sometimes and inverted-Y). The Willemsbrug towers seem to be an awkward half-way house, somewhere between the two conventional options and with none of the grace of either. 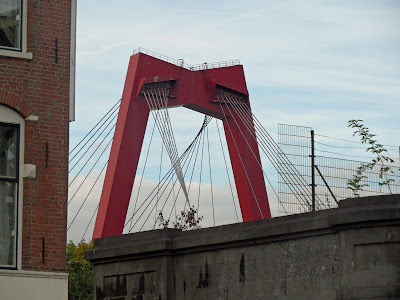 The cables are arranged so that although they pick up the deck along its edges, in a "vertical" row perpendicular to the towers, they connect to the towers in a horizontal row. This requires the fan of the cables to twist in space. I guess it may have been done to create visual interest, because I can't see any other rationale for it, but it seems gratuitous and forced, and from some angles results in a very odd-looking layout, especially for the cables nearest to the towers. 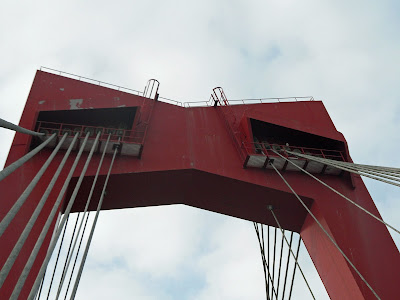 As they enter the towers, the cables pass below eyelid-shaped cowls, which if they didn't disfigure the bridge enough, are accompanied by distracting access gantries. Given that there are access ladders within the towers, I can't see the point of this detail at all. 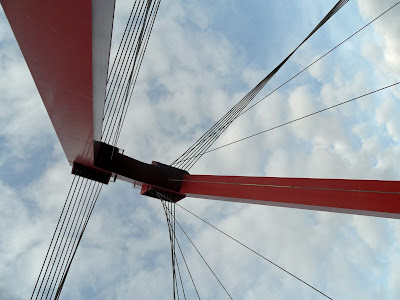 Overall, this must be one of the least visually successful cable-stayed bridges I can recall seeing, and it's a shame to end this whistle-stop tour of Rotterdam bridges on such a note!

Quoting from my "Bridging the World", "The cable pattern is unique in the plane is horizontal through the two supporting pylons and twists to vertical alignment where attached to the deck. A book on bridge aesthetics uses this an an example of disorder, but I found the effect visually pleasing."

The book I referred to was Leonhardt's Brücken. You and Leonhardt are apparently in agreement.

The bow-ties that make up the header of the Willemsbrug Bridge are in the towers of the Dame Point Bridge in Jacksonville, Florida, USA