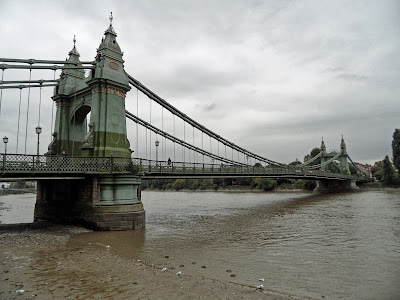 This is one of the oddest of London’s river bridges. Clearly, it ranks way below the thoroughly baffling Tower Bridge in the oddness stakes, but nonetheless, it is quite odd. 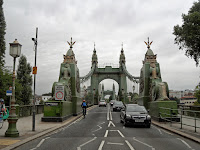 If it were to be found in Austria, or Hungary perhaps, it might seem less odd. Its strangeness is not inherent but in the way in which it departs so markedly from the sense of sobriety which characterises other London spans. There was a previous suspension bridge on this site, designed by William Tierney Clarke (perhaps best known to pontists as the author of the Buda Pest Chain Bridge). This had an impassive, monumental feel, with massive, flat-faced stone towers, and a bridge deck suspended from stout wrought iron chains. Despite the visual impression of robustness, it proved inadequate for its purpose, with movement under crowd loading giving rise to alarm. In 1887, it was replaced by the present bridge, to the design of Joseph Bazalgette, an engineer far better known for his sewers than for his bridges. 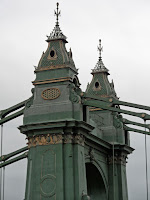 Bazalgette preserved the existing span arrangement, cutting the towers down to stumps and rebuilding above. The new towers are without doubt the bridge’s most striking features, with that outlandish ornamentation which seems more suited to an Eastern European castle than to the midst of London. The towers are built as wrought iron frames, disguised behind ornamental cast iron cladding, in the same spirit as Tower Bridge’s core metalwork was shrouded in stone (Tower Bridge commenced construction in 1886, while building work on Hammersmith Bridge was still underway). 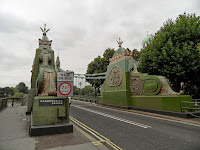 The towers sport decorative turrets (reportedly described by Pevsner as "little Frenchy pavilion tops"), and the sense of lavish inappropriateness continues to the end anchors for the main cables, which are massive elements, decorated with a number of heraldic crests to represent the numerous public bodies which shared authority over London infrastructure at the time of construction. 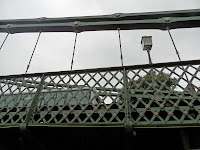 The anchorages and towers carry twin ranks of “cables” made from flat steel links. These in turn hold the hangers which carry the trussed road deck. Not all of what can be seen today is original: the bridge deck in particular was substantially rebuilt, particularly during a series of works in 1973 and again in 1997. However, the deck remains of timber, as it was when first erected in 1887. Many other features were altered e.g. the little star features on the lattice parapet are now made of plastic. 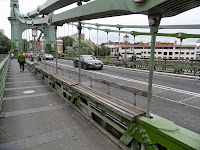 To me, the bridge has more than a touch of kitsch to it, but it's not without charm. In particular, there are rows of benches provided on each side, adjacent to the footways, perched upon the top of the main deck trusses. This shows a consideration to the public which isn't matched on many London bridges. 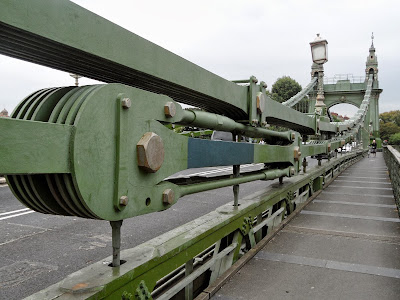 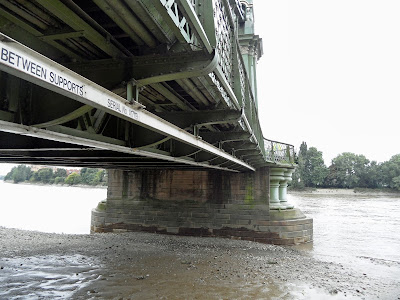