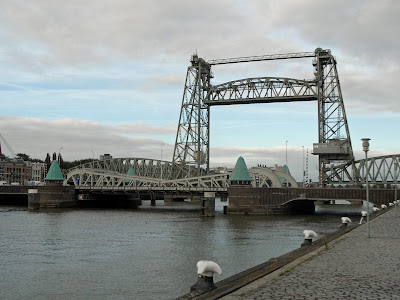 Two bridges cross the Koningshaven ("King's Harbour") in the City of Rotterdam. One is a giant, visible for some considerable distance, a monument to the city’s industrial heritage, now disused. The other, the subject of this post, lies low, perhaps asleep, and remains a key conduit for road, cycle and foot traffic. 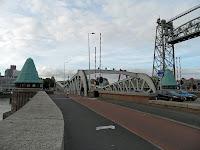 This bridge, the Koninginnebrug ("Queen's Bridge"), is a twin-leaf bascule bridge, of a type I hadn’t previously encountered. Two steelwork trusses cradle the roadway, while foot and cycle traffic uses walkways cantilevering from either edge. It does not appear to be a particularly modern structure (it was built in 1929, to replace a swing bridge), although it’s not hard to imagine what a contemporary designer could do with this form. 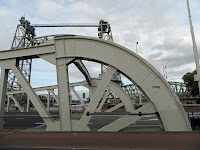 What makes it unusual is the lack of any visible counter-weights for the bascule decks. In most Dutch bascule bridges, the counterweights are made the most obvious feature, part of giant see-saws perched on towers, suspending the deck from hangers. This is sometimes call the “Dutch drawbridge”. There are, of course, many other examples of bascules where the counterweights are hidden below deck level (Tower Bridge in London springs immediately to mind), but probably few where it would have seemed easy to site them above deck. The effect here is to make the trusses appear unbalanced, with the 800-tonne counterweights entirely hidden below road level. 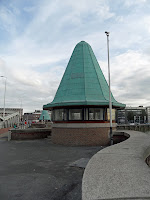 The other notable feature of the bridge is its quartet of control towers, from where shipping can be observed and the bridge opening operation monitored. These have dainty, curved peaked “hats” which at first strike struck me as a little incongruous when set against the more industrial metal trusses. However, it’s the sort of feature which gives a bridge a distinctive identity, and hence provides the reward for any pontist’s travels – if all bridges were made by Ikea, this blog would not exist. It’s constantly fascinating to see how similar problem s around the world have been addressed by highly divergent solutions, each contingent on variations in local resource, expertise, context and custom.

A charmingly odd bridge and I agree the turreted control rooms give the bridge a personality. The form of the bascule spans reminds me of http://www.ney.be/en/projects_details/91.html and also the Johnson Street Bridge by Wilkinson Eyre.

Thanks, I was aware of Johnson Street Bridge but hadn't seen the Ney design before. At Johnson Street, the counterweights are at the top of the truss, which greatly reduces the size of chambers required below highway level and is therefore a more "reasonable" solution.

What's the internal mechanism like? Simple trunnion?
I'm new here. I live just outside of Seattle, and the only bridges I know of with overhead counterweights are a couple or three railroad ones.
I can see I've got some catching up to do...