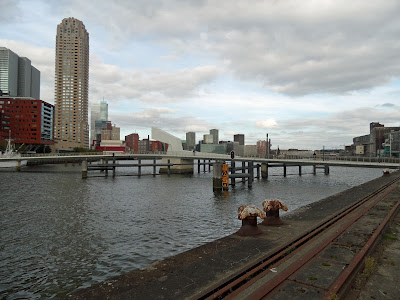 Other than perhaps the elevated walkway featured in the last post, this is the most recently built of the bridges I visited in Rotterdam. I have discussed it here before, when I explored several of the designs submitted in 2008 to a competition for a new opening footbridge. 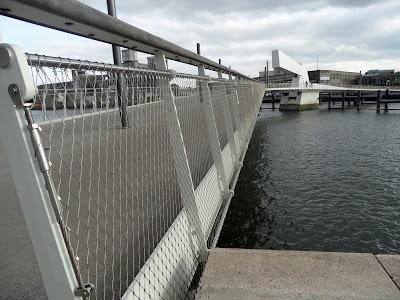 The bridge spans the entrance to a large harbour area, and therefore certainly makes a useful connection in an area which appears to be experiencing long-delayed development. The brief for the design competition was for a bridge which was relatively modest, which eschewed flamboyance. The winning design certainly met that demand, being a simple single-span bascule with a care for detail but an absence of bling. 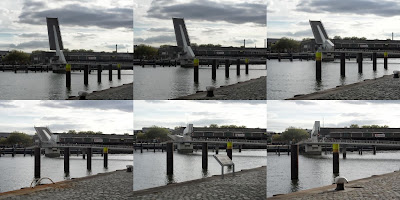 As built, the bridge has departed little if at all from the competition-winning images. I approached the bridge while it was open to allow a large ship to pass, and as it closed again. This reveals its signature feature, which is that the deck is offset from the pivot point, resembling perhaps a plasterer’s trowel, or a cake slice. 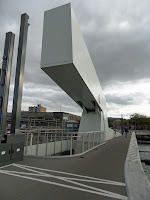 The opening span is counterweighted by what appears to be a massive solid block of steel (presumably a steel box containing adjustable ballast), minimising loads on the opening mechanisms and hence power consumption. This passes down through an opening in the deck when the bridge rises. It is connected to the main span by a steel box spine beam, offering an inviting surface on which to play, and hence likely to require repainting at an earlier date than the rest of the bridge. 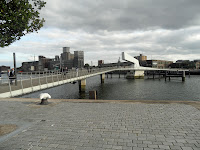 The layout of the bridge in plan seems awkward, consisting of a series of straight approach spans to the north, a kink, and a straight main span. This does allow people waiting at either end of the opening span to get a better view of the main deck as it opens. 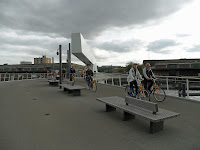 There are benches on the approach spans, and contemporary parapets which are doing a splendid job of attracting a mass of love-locks, as seems increasingly inevitable on notable pedestrian bridges. 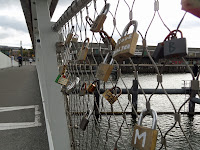 The shaping and size of the main bridge pier struck me as a little unsatisfactory, but my biggest criticism of the bridge relates to the deck lighting. This consists of a series of low-level airport-runway style blisters, which I rapidly discovered to present an unfortunate trip hazard. I’m astonished this detail was considered acceptable.

On the whole, the bridge is eminently reasonable in its lack of spectacle, a trait well-suited to this northern European country. This trait is sadly not present in much of Rotterdam’s modern city centre architecture (which often suggests the output of a stripy-suited banker-turned-architect-wannabe possessed of modelling software with “grandstanding” and “pointless-crumpling” presets). In that company, the bridge deserves praise. 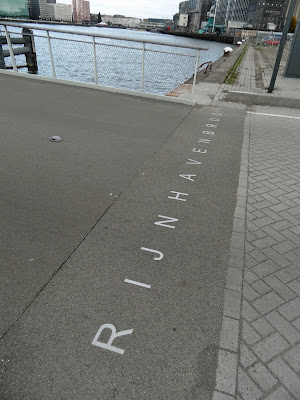