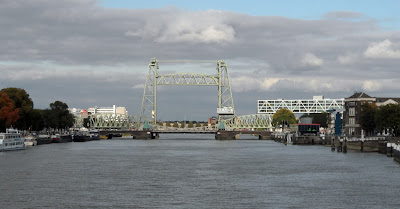 Officially called the Koningshavenbrug ("King's Harbour Bridge"), this bridge is nicknamed De Hef (“The Lift”) by the Dutch, showing a depressing lack of imagination. Why not “Stilty”? Or “The Old Rustbucket”? 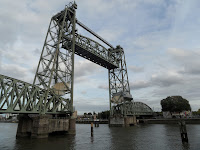 This is a zombie bridge. The railway line that it once carried is closed, superseded by an underground metro. Accordingly, the bridge is left permanently open, its deck raised high into the air. It is lifeless, but as yet unburied. It survives as a gigantic memorial to the industrial era, and in that respect it offers considerable visual interest.

The two side spans were built in 1878, originally with a swing bridge in the middle. In 1927, it was replaced with the present lift bridge span, to provide greater shipping clearance. It closed to rail traffic in 1993. 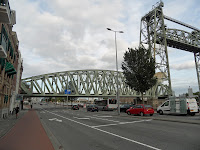 When I first drafted this post, I spent some time pondering on how the bridge could be re-animated. Bereft of purpose, it seems unlikely to receive much in the way of maintenance, and could go the way of redundant relics like the Warrington Transporter Bridge, becoming a massive liability for its owner, with only one possible outcome. 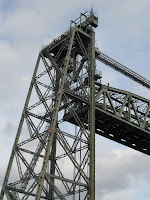 I speculated on whether the bridge could offer a home to a modern restaurant, possibly dining al fresco, raising diners up above their surroundings to gaze at Rotterdam’s nightscape while picking listlessly at over-priced hors d’oeuvres. Mindful of the need not to annoy nearby residents by blasting out avant-garde dance music (the kind intended to drown out conversation and thus reduce the chance of awkward words spoiling an intimate meal), patrons would instead have to be entertained by a gentle dinner-jazz trio, adding soft tootles and burbles to the soundtrack of city streets.

As it turns out, I need not have speculated at all, as a local entrepreneur is already way ahead with plans to repurpose the bridge - Hef Experience Rotterdam. As well as access to an elevated public space and a museum, this originally proposed to include activities like bungee jumping and zip wires. From what I can gather, attempts to gain political and financial support have failed.

Perhaps some measure of why the proposal is not widely supported can be found in an article for Vers Beton magazine with a title which could be roughly translated as "Hands off de Hef". This argues that the structure should be left as a monument to industrial heritage, and that maintenance costs should be met by the municipality out of "moral duty".

I think I fall on the side of pragmatism - this will be an extremely expensive bridge to maintain in years to come, and without any source of revenue, there will inevitably be pressure to dismantle such a cumbersome and non-functional structure. Unless it is repurposed, it may survive only for so long as the cost of demolition exceeds the cost of maintenance.

Sorry to take so long to reply to this one. Lots of thoughts.
I agree that it would be kind of neat to be able to make something fun or edifying out of it, but it doesn't look like it will be cost-effective/practical. Just as a sculpture, a historical relic, it will still be a pain in the butt to keep intact. If De Hef isn't maintained, it will eventually collapse, endangering people in the vicinity. Might just be time to do what one does for a moribund dog or cat. I've seen it happen with a couple of bridges here [Pugetropolis]. Not a happy occasion.
They should save the design, and find a way to artistically incorporate it into some future bridge...that way The Lift will "live" again.
We have 3 bridges of that type here that have just passed their century mark [all right, 2 are in Oregon], and some bascules that are not far behind. Given proper care, they can last a while. But in this country, we can't even seem to take proper care of people...