Someone recently emailed me a link to an Archdaily feature on the Knokke Footbridge, in Flanders in Belgium. Although it was completed a couple of years ago, I wasn't previously aware of it, and it's such a gorgeous design I just had to include some pictures here. 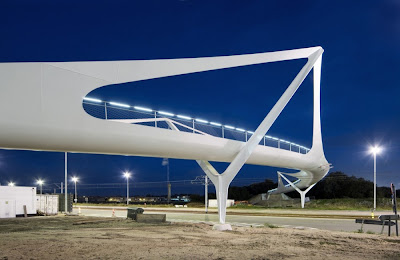 It was designed by Ney & Partners, whose website is well worth a look, as this is far from the only marvellous bridge they've designed.

It's a three-span hybrid cable-stay/suspension bridge (28m, 46m, 28m), albeit one which is both technologically audacious and aesthetically exceptional. It carries cyclists and pedestrians via a curved route above the Queen Elizabeth Avenue, a dual carriageway on the way into Knokke.

The concept sketches show the basic idea: the bending moment diagram for a three-span structure is used as the basis of the overall structural shape (see left, click on any image for the full-size version: all sketches are by Ney and photographs by Daylight). This gives the standard form for a suspension bridge or a haunched girder bridge, with a deeper section above the supports. They then proceeded via a series of design optimisation steps to remove as much material from the "web" as possible, resulting in the elegantly curved cut-outs of the final bridge.

The photo on the right shows the result, and you could interpret it as either a cable-stay bridge or a suspension bridge according to preference. The webs are formed from 12mm steel plate, as is the main deck girder, allowing the "cables" and deck to be formed from a continuous joint-free material.

In profile, it reminds me very much of the Tavanasa Bridge (see left, photographer unknown), where Robert Maillart started with a closed-spandrel arch design, creating cut-outs where he knew the concrete to be providing little real benefit. The Knokke bridge is just the Tavanasa structure turned upside down, with concrete replaced by steel.

In cross-section, the Knokke designer's sketches (see right) show the bridge webs continued and curved below the deck, acting as a cradling suspension system transversely (i.e. the steel plate is all in tension, never subject to significant bending). 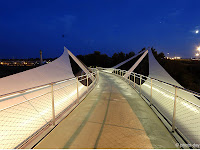 As can be seen from the photographs (see left), that's exactly what they achieved. The deck part is partially infilled with concrete to form a box girder which is stiff in bending and torsion, and also stiff enough axially and horizontally to sustain the effects of deck curvature (arching in plan). 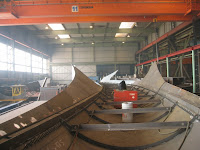 Essentially, it's a bit like a membrane structure, where everything is form-found to carry only tension forces, except for the stiff box girder deck (see image on the right for a better view of how the deck is put together). 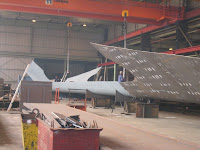 One of the disadvantages of doing this in steel is clearly the cost of bending all the steel to the desired profile. Another is that unlike a fabric structure, the steel doesn't alter its shape in response to varying loads, so in many situations it will be in a far from perfect stress state. The final difficulty is simply that of welding large thin sheets together (see left), but I think the resulting evidence of the bridge's making (weld lines) is a positive thing in what would otherwise be an ultra-smooth bridge. 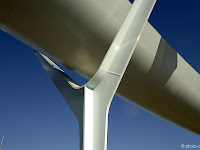 The deck is hung from two Y-shaped piers (see right), and considerable effort has gone into making these as minimal as possible, just some stiffened steel plate rather than the box sections that would be a more conventional solution. This is presumably possible because of the bridge's curvature, which allows the lateral forces in the deck to be reacted elsewhere. The piers wouldn't satisfy UK requirements for strength against accidental vehicular impact, so let's hope they never get hit!

The whole thing is finished off with some simple chain-link balustrades with LED lighting recessed into the handrail, and a couple of tiny deflectors above the highway (see left), which I presume are there to prevent people urinating too easily on the electric overhead tramway wires.

Overall, it's an absolutely gorgeous design, an exemplary piece of engineering, and one of the finest bridges I've seen this year.

There are dozens more great pictures at the ArchDaily and Ney and Partners websites, so go and take a look!

See also:
Knokke Footbridge at Structurae
Posted by The Happy Pontist at 10:06 PM

These guys have got real flair.