Another one bites the dust

Fresh from the news that his US$500m arched design for the Margaret McDermott Bridge in Dallas is to be dropped due to its excessive cost, Santiago Calatrava has seen another bridge project cancelled.

This one was for Denver International Airport, for which Calatrava is already designing a new terminal building. His planned 189m span arch bridge, pictured below, was intended to form a spectacular gateway to the airport, but has been ditched, again on cost grounds. Latest reports give a cost of US$22m, but it's not entirely clear if this is correct, earlier reports were talking about a US$60m bill for the bridge. 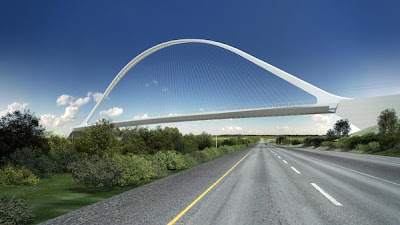 It would be unfair to suggest there is any kind of trend here.

Reports that Calatrava's World Trade Center Transport Hub in New York may see its cost rise from US$2.2bn to $3.8bn are clearly unrelated. And it would be simply churlish to recall that Calatrava originally proposed not one but two Alamillo bridges in Seville in Spain - one being omitted when the costs came in. His footbridge in Venice was completed with the vision unaltered, although opening ceremonies were cancelled due to fear of protests (possibly connected to the near doubling in its budget over time).
Posted by The Happy Pontist at 9:53 PM