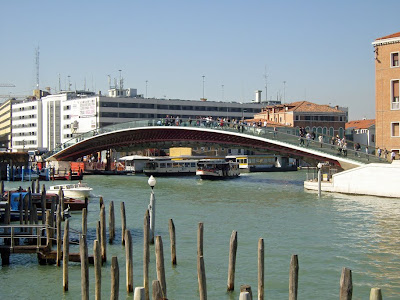 The Ponte della Costituzione ("Constitution Bridge") is the most recent bridge to be built across the Grand Canal, and may seem to be the most controversial due to a number of complaints that I’ll come to in a moment. However, it should be noted that the other crossings were also controversial when first built. Antonio da Ponte’s Ponte di Rialto was the source of criticism from rival designers who felt its single span was over-ambitious. Alfred Neville’s iron truss Ponte dell’Accademia was seen as an affront to the traditions of Venetian architecture. 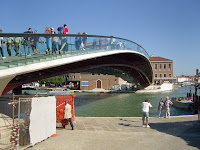 The fourth bridge was built to replace an existing ferry, or traghetti, which linked Venice’s Piazza Romale bus terminal to its Santa Lucia rail station. At this point, the Canal is considerably wider than is the case further south along its length. The design contract was awarded to Santiago Calatrava in November 1999, an audacious choice for a city presumably afraid to tamper with its heritage for fear of alienating the visitors who provide much of its revenue. The bridge was built by Cignoni, and opened in September 2008.

Traditional Venetian arch bridges never venture beyond a span to rise ratio of about 7:1, as beyond this the horizontal thrusts to be carried by the foundations become very difficult to accommodate, and even below this it can be a problem. Shallower arches have been built elsewhere, but generally on firmer ground. 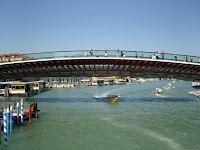 Calatrava’s proposal was for a steel arch footbridge spanning 80.8m, and with a total rise of 4.76m, a ratio of 16:1. The rationale would seem to be entirely straightforward: it avoids supports within the Canal, with their consequent disruption to navigation. It achieves the required navigation clearance while minimising the slopes that users have to climb, something of a relief compared to its steeper forebears. 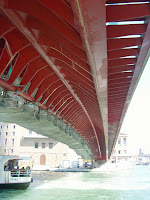 The bridge is carried by a ribbed steel spine, consisting of five steel boxes linked by ribs in a configuration which is star-shaped in section. Within the vertical plane, the ribs form a Vierendeel truss, with the truss web members set off-vertical in a radial arrangement. The steelwork is painted red rather than Calatrava’s characteristic white. The bridge deck (which varies from 6.5m wide at the abutments to 9m wide at midspan) is constructed in reinforced concrete, with some glass panels at the edges. The parapets are in structural glass, with bronze handrails. 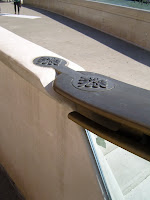 I think that in overall form it is very much an excellent response to its context. The low-profile arch is a great complement to the other Venetian spans. The arch springings are very beautifully shaped, and there are nice little details like the ornamentation at the ends of the handrails, which nicely subverts Calatrava’s traditional purity of form.

Seen in person and up close, it is however peculiarly disappointing. I think much of this is due to the fact that it is already rather dirty, with the red steelwork taking on a distinctly faded appearance. While this brings it in line with the dilapidation seemingly normal to Venetian bridges, it reduces the bold visual impact considerably. 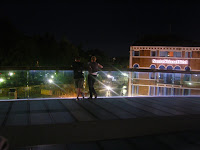 I think the parapets are great, but the bridge deck less so. This is mainly because of the steps, which vary in tread length significantly as the bridge is climbed. Traditional Venetian arch bridges manage to avoid this by not having the steps follow the arch profile too closely. On the Ponte della Costituzione, the effect is quite disconcerting, and it’s unsurprising that a number of legal claims have been made by bridge users tripping on the steps. The problem is enhanced by the lack of any kind of visibility measure on the step edges (such as the yellow border often used to make them clearer to the visually impaired). I don’t think this would have greatly upset Calatrava’s design vision, as colour contrast can be used as effectively as very bright colours. 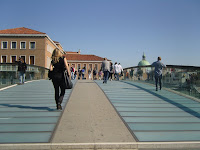 The glass decking has also been alleged to be slippery when wet (not for the first time on a Calatrava bridge). However, the biggest criticism of the bridge’s accessibility is simply that the use of steps is inappropriate in the modern age, as making access very difficult for the mobility impaired. As a result, a disabled access lift is currently being added to the north face of the bridge (the face probably least often viewed or photographed), and criticism relates to the fact that it is apparently an afterthought and didn’t form part of the original project.

However, I have some sympathy with Calatrava, as few if any of the other Venetian bridges I saw are accessible in the modern sense, and his shallow slopes make the bridge far less strenuous to cross than the others. Why should disabled access be such a big issue here but not at Rialto or Scalzi? This is a Venetian problem, not a Calatrava problem. 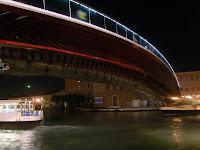 The bridge has also been criticised for its structural behaviour. The star-shaped cross-section can only be stiff torsionally if diagonally braced, which it isn’t, with the result that twisting behaviour was a major design concern. The huge horizontal thrusts generated by such a shallow arch (roughly seven times the vertical thrust, according to the authors of a paper listed below), also require huge foundations, and it is essentially impossible to prevent the foundations from moving over time, such that the bridge’s arch behaviour would reduce, and it would behave more like a beam (as it already does to some extent). To address this, Calatrava has provided jacking facilities at the end(s) of the bridge, such that as the foundations move over time, the bridge can be jacked back to its original profile.

Many of these criticisms are hinted at in the paper on the bridge’s engineering, and while I pretty much agree about the torsion, I think the arch thrust issue is simply an engineering challenge which had to be met if the bridge’s architectural conception was to be respected. So long as the foundation movements don’t affect adjacent structures, the jacking solution seems a reasonable one.

Calatrava himself is on record as saying "This is my most beautiful bridge", and blaming the bridge's problems not on his design, but on the contractors. 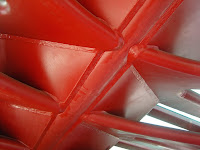 The bridge received perhaps its greatest criticism for its cost, which escalated considerably as the project progressed. The final cost is reported as being €7.3m for the bridge contract, or €11.3m including other costs such as surveys (up from €6.7m when estimated in 2002). A formal opening ceremony was cancelled for fear that it would be disrupted by protesters.

Overall, it’s a fine bridge, far better than the criticism would suggest, which would benefit greatly from being kept clean, bright, and properly illuminated at night.

Further information:
Posted by The Happy Pontist at 11:31 PM

We visited Venice recently and as a lover of Calatrava's work I was looking forward to seeing it. I was rather disappointed and I find it difficult to believe that his work has not been subverted by influences outside of his control.
It is absolutely crazy that wheelchair access was ignored. It is ridiculous in the 21st century it is no excuse that the other bridges do not have it. They were designed in a different age. It is not just wheelchair users who had to suffer. While we were there countless people were struggling with heavy wheeled suitcases. Crazy!
To be a sculptural form is great but if a bridge fails to fulfil its function poorly it is BAD DESIGN.

"Overall, it's a fine bridge": who are you kidding? It's difficult to negotiate, even dangerous; it but poorly serves the tourists who are its reason for being (let alone the handicapped; cost the earth to build and the moon to maintain. AND it'll need jacking occasionally to correct for shifting foundations. Jacking may be a good solution, but the problem ought to have been recognized and avoided by the architect. I admit it's very pretty at night when seen from the far side: then the people crossing have a lovely ghostly appearance because of the glass parapet. But that's hardly enough. Calatrava at first insisted on giving his own name to the bridge. I was offended by his hubris but have since changed my mind. It should be called the Calatrava Bridge so that everyone will be aware of who perpetrated it.

I fail to see the problem. It's easier to negotiate than almost every other bridge in Venice, and as a tourist, it served me just fine. The jacking solution is entirely reasonable, what are you offering that's better? The maintenance costs don't strike me as unreasonable for what the bridge is, either.

I recently saw Calatrava’s bridge for the first time. Almost my first thought was that the horizontal thrusts must be enormous, and delivered at an angle which would make raking piling extremely difficult. There is a reference in the venezia blog which says that “...the mechanism [Calatrava] designed to compensate for this excessive horizontal thrust has proved inadequate to the task.” Do you have any idea what this mechanism might be? My first response to the question of how the thrusts might be dealt with was that the abutments could be tied together just beneath the level of the canal bottom by multiple steel cables or bars which could be replaced one by one in, say, the 23rd century.

My second thought was to compare this bridge with one of my favourite bridges, which I’ve only seen in illustrations, as it was destroyed or dismantled some time after 1957, the year it was photographed by Robert Doisneau. This bridge, the passerelle (footbridge) de la Moselle crossed the Bassin de la Villette in Paris. It was apparently built in 1882 by the engineer Armand Moissant. In can be seen in two photographs in Robert Doisneau, edited by Brigitte Ollier, pub. Hazan, 2013. It incorporated a large clock at its centre, a sliver of which is visible in one of the photographs. The span on this bridge was somewhat less than that of Calatrava’s, and it appears to be narrower too, but its arch is very shallow and the horizontal thrusts must have been considerable. It has been replaced by a boring flat truss, resting on the same abutments, I think, and with two intermediate piers standing in the basin. Without access to detailed drawings it’s impossible to gauge, but I suspect that Moissart’s bridge used less steel per square metre than Calatrava’s; I also find it more elegant, it has great clarity whereas, in my view, it’s very difficult to see how Calatrava’s bridge “works”.

Hmm. I suspect you might not have been such a happy Ponting had you crossed using the glass steps. Particularly in a Venetian fog. There is no excuse for a bridge designed in the 21st Century to not meet current standards of user safety and accessibility.

Being lyrical about the lovely star shaped structure does not allow you to ignore the fact that the bridge is, at best, an inadequate solution to the problems that generated the requirement.

Sorry, but I disagree: I did cross using the glass steps. There's almost nowhere in Venice that's accessible without having to use steps: that's a simple function of the city's topography, which has low-lying canal-side footpaths, yet a need for all bridges to rise up to allow boats to pass below. There simply isn't the physical space for ramps, and Calatrava's bridge is no different from its neighbours.

I would probably agree, however, regarding the choice of glass, which is not the smartest solution for any outdoor bridge.