How not to run a bridge design competition

Here are a couple of bridge design contests I've not previously mentioned, both in their quite different ways offering examples of how, perhaps, such competitions should not be run.

The first is the Four Mile Run contest, for a new pedestrian / cycle bridge across a flood control channel (pictured below) in Arlington, Virginia, USA. This forms part of a wider scheme to revitalise the flood ditch's ecology and turn it into a park. They're currently inviting prequalification submissions (deadline December 7), with the intention to shortlist three teams to come up with concept designs and present them in a public forum. 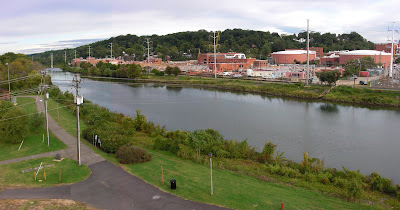 So far, so good. It's a flat site offering plenty of scope for creativity (a couple of overhead cables in the way being the only significant problem), although equally the landscape is somewhat uninspiring.

It's more of a competitive interview than a design competition as such: they're looking for a team who they can work with in future as much as they are looking for a bridge concept. To that end, the prequalification criteria emphasise previous experience of similar span footbridges, ability to work with multiple stakeholders, and professional standing measured by number of awards and past innovation. That's all likely to result in a safe, conservative selection.

What's really wrong with the competition is that there's no way for entrants to judge risk against reward, and hence decide whether they have any real chance of winning.

There's no suggestion that anyone has carried out the sort of preliminary feasibility study that might confirm they've chosen the right location for the bridge, or provide engineering data to inform the design. There's very little guidance on how ambitious a bridge they're looking for, whether a landmark or something more subtle. The lack of anonymity also leaves the process open to favouritism or political sway (this is inherent to the competitive interview format).

Worst of all, there's no serious prize money for the winner (the three shortlisted entrants each get a US$5,000 honorarium); no indication of what funding, if any, is in place to take the bridge design contract forward; and indeed no commitment whatsoever to actually appoint the winner to a further contract.

The other competition I spotted recently is an open contest for a new footbridge in Maribor, Slovenia. This one is clearly aimed at choosing a design, not a designer, and it's part of a three-part contest, the other two sections relating to an art gallery, and river embankment improvements. Contestants can enter any one part of the contest, or more than one if they wish. It's all part of Maribor's status as European Capital Culture in 2012. A site plan is shown below. 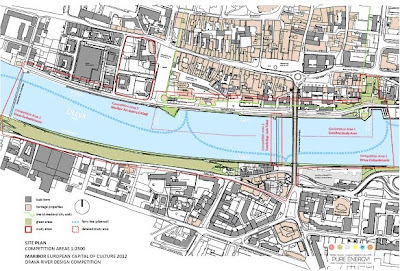 Registration closes on 4 January 2010, and is open only to registered architects. What's that? You think an engineer can design a perfectly good bridge on their own? Well, the town of Maribor doesn't agree, largely because they've adopted wholesale the guidance on architectural design competitions promoted through UNESCO by the International Union of Architects, and as with all such trade bodies, the guidelines are there to protect their members' interests as much as anything else. All the judges will be architects too, they may seek technical advice on the designs submitted, but there's no strong voice for engineering, or for the people who will have to pay for the bridge or maintain it once built.

You might expect they'd at least insist that architects partner up with an engineer, but no, they've succumbed to the same malaise that afflicted the Krakow contest. Nobody should be surprised if the result is the same: a design that looks impressive, but couldn't actually stand up.

Like the Four Mile Run competition, there's no information on whether the organisers have a budget to build a bridge, but at least they make a firm commitment to appoint the winner to a design contract, and the prize money is relatively attractive, with 30,000 euros for the winner, and further prizes for 2nd and 3rd place.

Posted by The Happy Pontist at 8:26 PM

Your criticism of the Four Mile Run competition indicates that you have not studied the Master Plan that was been adopted for this much larger urban stream restoration project – in of itself it has won a number of prestigious design awards. The surrounding area, now unremarkable, will undergo significant change over the coming several decades because of that plan, with the pedestrian bridge as a component, the purpose of which is outlined in that plan and the subsequent Design Guidelines for the larger project. Those who initially set out to conduct the bridge competition would have also preferred a more traditional, open design competition, but the money for the competition came through the State of Virginia – Department of Transportation. The strings they put on using the money (“we can’t pay for no competition!” ) resulted in this format. Not ideal, but its what we’ve got to deal with. I suspect that other governments in other places are more daring when it comes to design – but the government of Virginia is still a very straight-laced operation.

Yes, it was probably unfair to take the 4 Mile Run contest out of the wider development context. However, I'd stand by my view that a fair competition is one where a designer can sensibly judge the balance of risk and reward; that ensures participants understand whether their expenditure in entering is a reasonable investment. At 4 Mile Run, with limited prize money, no guarantee of the design contract even if you win, and little guarantee a bridge will ever be built, it's very difficult to achieve that understanding, and the risks appear to outweigh the rewards.

A similar contest in the UK was the River Douglas competition, where the promoter was seeking great designs but was unwilling to pay properly for them, and wanted to use those designs to secure funding for their bridge. That attracted plenty of entries, but it's still not a set-up that I think makes best use of the industry's resources or talent.

Happy: "... the risks appear to outweigh the rewards."

Don't forget, the first phase is an RFQ/SOQ. Only the three shortlisted entrants will produce a proposal.

Yes, that's undoubtedly one of the positive features of the Four Mile Run contest, the fact that only three firms have to do any "real" work (positive for competitors: the client gets less value for their money). That's a marked contrast to the River Douglas example I cited, and perhaps it wasn't therefore a good example. What they have in common is a client with no funding for their bridge and no commitment to award a design contract to the winner - regardless of the number of entries, that remains an unattractive proposition.

It will be interesting to see what the IABSE guidelines on bridge design contests say when they are finally published, but the general view amongst other designers I've spoken to is that clients are far better getting as many ducks-in-a-row before a competition rather than afterwards, if they are really serious about building a bridge.

About the Maribor design competition … it seems to be the new mind in place, telling and convincing everyone and oneself that an architect is the only one, the chosen one, to design space, structures and nowadays even bridges and that the engineer is not needed, in case of Maribor design competition even unwanted and literally prohibited to participate. I wonder when the architects will hit upon that they should undertake difficult medical operations instead of highly educated doctors of medicine, or maybe design even spaceships instead of highly trained spaceflight scientists, … I am afraid that this days are near to come.
Well in case of the Maribor design competition, the first and the major leak in the competition plan for the new footbridge is the prescribed location of the bridge. It couldn’t be defined more wrong! If one takes only a fleeting view of the site I think that one must recognize, why an existing bridge is being demolished about 100 years ago at this very same location and that the probably best location in this case would be some 200m upstream – but don’t dare to agree whit this if you are an architect and if you aren’t one then it doesn’t matter what you think … that is how the competition in Maribor is held and is to be carried out. In the end a lot of money will be spent and no bridge will be built – sad but true or put it the other way much a do about nothing – that is how it is on the Maribor streets – and I sincerely hope I am wrong about this.

"You might expect they'd at least insist that architects partner up with an engineer, but no, they've succumbed to the same malaise that afflicted the Krakow contest. Nobody should be surprised if the result is the same: a design that looks impressive, but couldn't actually stand up."

Well... partnerships in my opinion should be allowed due to the fact that more ideas can arise, so the bridge could look both impressive and in the mean time can still be practic. But I don't think that architects alone don't manage to do a good job. I think they care about the functionality of the brigde not only about the way their work looks like.

It is a good thing that the project starts with a contest. I say this because I believe that the commision will evaluate different reports and will choose the one that looks good but also responds to the needs of the locals.

To be fair to Maribor, they later reversed their decision and allowed engineers to enter without an architect. See my posting about the competition results. At least one of the prizewinners bears out the comments I made here about how too much focus on architecture can lead to acceptance of a bridge that is unbuildable in its envisioned form.

What !!?! Their decision is to allow engineers to enter without an architect I don't think this is a smart choice.. sorry to say that :|