The Battle of Johnson Street Bridge rages on

Last month, I wrote about the Johnson Street bridge in Victoria, British Columbia. This is a historic Strauss heel trunnion bascule bridge, with parallel opening spans carrying both road and rail traffic (pictured below, image courtesy of City of Victoria). 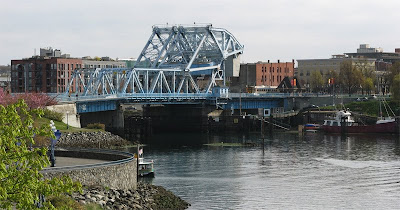 Plans were afoot to replace it with a CAN$63m MMM / Wilkinson Eyre design, itself an unusual bascule bridge featuring a striking ring-girder support (again, pictured below). 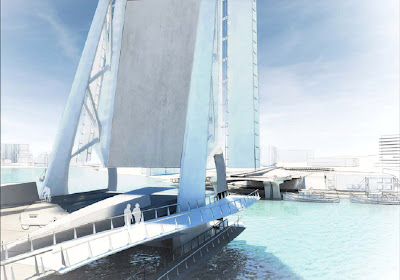 The project was fraught with controversy, with a highly articulate online campaign opposing the scheme on the grounds that the existing bridge could be refurbished rather than replaced. This view ran counter to the advice received by the city authority.

The whole debate seemed to become moot when it was announced that the City of Victoria would not receive the federal funding it had been counting on to pay for the bridge replacement.

Since then, the pendulum has swung back the other way, with the announcement that some federal money is available after all: CAN$21m, to be precise. That "only" leaves $42m for the City to find, with the provincial government of British Columbia keeping its hands in its pockets.

The opponents of the bridge replacement option are undeterred, and have redoubled their attempts to win support for a refurbishment approach. Parsons Brinckerhoff engineer Frank Nelson has been invited to Victoria to present the case, arguing in the Victoria News that it's "a one-of-a kind bridge, the e-mail chain [between historians] has been going mad for the past month and they can’t find another one". The opponents are pressing for a referendum.

A cynic might argue that Nelson is unlikely to make any other argument: he's a specialist in bridge conservation, not in design of new signature bridges (for more detail on his views, there's a 125MB Powerpoint presentation at johnsonstreetbridge.org).

But for me, it's difficult to come down on one side. It's undoubtedly a spectacular structure (although a struggle to find it beautiful) - see some great photos at Yule Heibel's blog, for example. Opponents of replacement are arguing that it's unique worldwide (because of the parallel road and rail spans, not because it's a Strauss heel trunnion design), and the heritage value is therefore substantial. But refurbishment will be expensive, and replacement of the mechanical and electrical systems won't mean a bridge of this age becomes maintenance-free.

It's not yet clear whether we're seeing the opening skirmishes in a lengthy battle - certainly there's no sign that either side has mounted a decisive offensive just yet. There's no obvious compromise solution available. For me, it's great to see an informed public taking such a great interest in the bridge, and I'm sure I'll follow this story further in the future.

Posted by The Happy Pontist at 3:05 PM

Thanks for addressing a subject that bridge engineers find frustrating: the politics of old bridges. We all feel sad at the loss of beautiful and unique structures, but we are seldom happy with the tremendous expense of keeping them in service.

With a highway system that was completed in the 1970s, this is an issue that I deal with on a regular basis.

I don't know why such a simple device is so hard to explain clearly. I guess a picture of the open bridge would be better than my thousand words.