I recently posted a link to an interview with Amanda Levete, whose project with Arup for a highway / light rail bridge at Spencer Dock in Dublin has recently been partially opened to road traffic [PDF].

Following the winding-up of her previous practice Future Systems, Levete has established a new practice, Amanda Levete Architects, who have recently released a delightful set of photos of the Spencer Dock structure (larger versions online here). I'll note from the outset that while AL_A are currently claiming much of the credit for the bridge, it should presumably be shared in some part with Nex Architecture, another new practice formed by Alan Dempsey, who left Future Systems after acting as project architect for Spencer Dock. Judging from his very interesting presentations online [both PDF], he played a large part in ensuring the complex geometry was actually buildable (several of the images below come from those presentations; all other images are from AL_A). I've mentioned Dempsey here previously, when he won the Ballsbridge-Dodder footbridge competition.

The bridge is a slightly asymmetric two-span, 3250-tonne post-tensioned structure, 40m in length and about 25m wide. As with many Future Systems designs, the bridge is organic in form and in this instance appears to draw inspiration from the undulating shape of a manta ray. The flowing form is a little reminiscent of their unsuccessful entry to the Glasgowbridge competition.

Designing an aesthetically attractive bridge with such a large width-to-length ratio is always a challenge, particularly considering the appearance from below. It's all too easy to create a space that's dark, forbidding and unpleasant. 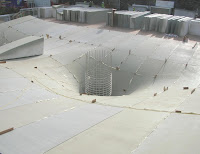 At a reported €5m, the bridge is pretty good value for money (about €5k per square metre), although as far as structural or construction efficiency goes, it's an exceptionally inefficient design. To achieve the curved soffit, the canal bed was pumped dry, and 250 individually profiled polystyrene blocks were assembled on scaffolding.

Each block has been individually cut using CNC machinery, coated in polyurea and then sanded to give a smooth finish. The image on the right is from the CAD model used to work out the block profiles. The edge fascias comprise 34 precast elements, each slightly different in geometry.

It's difficult to see how else the doubly-curved shape could have been achieved, as the structure doesn't lend itself to the use of fibre-glass or ultra-high strength concrete shells. I guess it's a shame that all this advanced technology can't also be employed to make the poor reinforcement detailer and fixers' jobs easier - designing and then fitting all that curved rebar can't have been much fun.

While this is all completely at odds with the conventional wisdom amongst bridge engineers, it's a powerful lesson in what can be achieved visually using modern digital design technology with the assistance of innovative talent and a supportive client. One of the great failings of modern concrete construction is that despite its ability to create beautifully sculpted shapes, it is so rarely used in this way.

The bridge is all in white concrete, which will maximise the feeling of light underneath, although some of the preliminary visuals suggested a murky green appearance, which would have been interesting. Intelligent use has been made of recesses between the polystyrene panels to both break up the soffit and hide what would otherwise be irregular formwork joints.

Overall, has the effort been worthwhile? I'm generally no fan of blobitecture, which strikes me as a fad which will ultimately have to give way to the more efficient spaces and construction methods demanded by a low-carbon, post-crash economy. However, the photos suggest this to be an uncommonly beautiful bridge. And there are technological spin-offs from pioneering work of this kind which will prove useful elsewhere, and which will never arise from the mundane projects where boundaries are respected rather than pushed.

The bridge has been nominated for a LEAF Award.

Interesting post! Although the bridge building technique is interesting, I'm not a fan. In terms of architecture, it feels like something from the sixties. (think white modular furniture) In my view, light and airy trumps blobby and heavy.

I can also see this technique being overused since the concrete can be formed into any form. Maybe a big bunny bridge by Claes Oldenburg or Frank Gehry discovering concrete instead of steel.
I wonder how this would be used on a long bridge?
s

I have to agree with you - from the pictures, it's a real lesson in what can be done with doubly-curved surfaces if the usual structural and construction pragmatism isn't dealt out by the engineers at the concept design stage. I'm equally guilty of that!

As the technical issue of formwork fabrication can be overcome, what do you think of the use of non-standard reinforcing methods such at fibre reinforced concrete? Prestressing cables will remain neccessary both laterally as well is in the longitudinal direction, but if it's possible to remove the issues with local detailing of reinforcement then this type of construction becomes much simpler to design and construct.