Without doubt, one of the greatest bridge engineers of the twentieth century was Fritz Leonhardt. While younger engineers such as Leonhardt's colleague Jörg Schlaich have won renown for their purely creative talents, Leonhardt's stature owes as much to his technological expertise and wide-ranging academic research as to his ability as a design engineer. His book "Bridges: Aesthetics and Design" is an encyclopedic classic, sadly currently out-of-print, and he played a central role in the development of prestressed concrete and cable-stayed bridge design.

A book devoted to this genuinely legendary figure has been long overdue, so it's great to see the gap now spanned by "Fritz Leonhardt 1909-1999: The Art of Engineering" (ISBN 978-3-936681-28-4, Edition Axel Menges, 2009, 216pp) [Amazon UK]. The book is published on the centenary of Leonhardt's birth, an occasion also marked by a conference and exhibition.

Leonhardt was educated as a civil engineer in Stuttgart, with his professors including the likes of Emil Mörsch , one of the pioneers of reinforced concrete design. As a student, he visited Othmar Ammann in America. Before he was thirty, he had already published one book on bridge design and prepared the design of the Cologne-Rodenkirchen suspension bridge, the first significant such bridge in Germany. 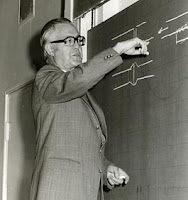 The list of his subsequent achievements is exceptional: development of his own prestressing system (and author of the seminal book "Spannbeton für die Praxis" as well as many others), research on orthotropic steel plates, design of the Stuttgart TV tower and the innovative Theodor-Heuss-Brücke, and collaboration with Frei Otto on tensile membrane structures (especially the 1972 Munich Olympics tent). He combined a highly active design career with a pre-eminent academic position and involvement in most of the major international structural engineering bodies. He was undoubtedly one of the giants amongst engineering, any kind of engineering.

How best to document the achievements of such a multi-faceted talent? "The Art of Engineering" is a collection of essays covering everything from Leonhardt's development of grillage analysis techniques, through overviews of his many bridges, to personal accounts of his time at the University of Stuttgart. Many of the essays are by people who knew him well, such as colleagues Schlaich and Holger Svensson, and academics such as Werner Sobek. The book also includes an abbreviated biography, and a lengthy bibliography listing many of Leonhardt's key writings.

The book is well-illustrated, mostly in black-and-white, although with some colour images. The most interesting of these include Leonhardt's own design sketches, such as those for the Hamburg television tower and the Kocher Valley Bridge near Geislingen. Nonetheless, it's a less lavish production than the similarly titled "The Art of Structural Engineering: The Work of Jörg Schlaich and his Team" (by Alan Holgate), from the same publisher. The emphasis is very much on the text, which is in German with a complete (and generally very readable) English translation by Friedrich Ragette.

From my perspective, an interesting contribution is Klaus Jan Philipp's "Rivets as ornament - Master builder Fritz Leonhardt", which analyses Leonhardt's long interest in the intersection of ethics and aesthetics. It shows both how Leonhardt demands a high-quality collaboration between knowledgeable architects and engineers, but ultimately remains a conservative, dismissing radical innovation in structural form for its own sake.

I also very much enjoyed the technical histories, such as Eberhard Pelke's "Early prestressed-concrete bridges", and Elisabeth Spieker's "Planning the Olympia roof in Munich". These, and several similar essays are great reading for the historically aware engineer, and emphasise to me how poor our engineering education is that there is so much to learn about such a well-known figure.

However, I found the most interesting sections were the more personal ones, by authors reflecting on their personal memories of Leonhardt. These show him to have been a thoroughly remarkable figure, able to combine a huge workrate with involvement in the wider world and a great love for the outdoors. Leonhardt was often conservative in his strict conception of ethics, to the extent of being unwilling to consider new ideas, but also adapted to suit the wider changes in Germany throughout his life, while being unafraid to challenge establishment views when it suited him. It's possible that only a fragmentary collection of essays such as this could truly capture his multifaceted achievements and character.

Modern civil engineering is short of heroes, and inspirational figures, with Leonhardt being one of the great exceptions to that rule. "Fritz Leonhardt 1909-1999: The Art of Engineering" is a fitting tribute to him.

See also:
Bridge aesthetics by numbers
Posted by The Happy Pontist at 10:04 PM

Leonhardt was truly one of the greatest engineer of 20th century!

I have to agree. Leonhardt is great.