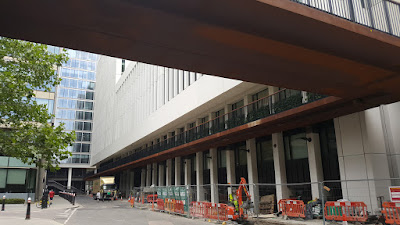 Look, up in the sky! Is it a bridge? Is it a walkway? Is it a skywalk? No, apparently it's the return of London's pedways.

The original pedway scheme was the idea of London's town planners in the 1950s and 1960s, an attempt to elevate pedestrians above increasingly car-dominated city streets. Several new buildings were required to include provision for pedway access at first-floor level, but few of the pedways  planned were actually built.

They were perhaps most fully realised in the vicinity of the Barbican development, spanning across roads, and connecting the new Barbican cultural centre to the residential blocks which surrounded it.

However, with most foot journeys originating and ending at ground level, pedways were often as much of an inconvenience as a boon, and the idea soon died away. Despite their lack of success, pedways continue to exert a strong fascination for design and architecture critics and bloggers, and I've included various relevant links below providing more information.

With the construction of a massive new office development at London Wall Place, the idea has been revived. This was an original pedway location, so the new development is essentially reinstating what had once been there, albeit with a 21st century sense of style.

The new walkways span one busy road (and others that are less busy), and at least do serve a useful function in connecting into the Barbican's pedways, which do still form a useful connection. However, the walk below the pedways at ground level also an attractive route with extensive public realm enhancements in the St Alphage Garden section.

The walkways were designed by the team also responsible for the office building, Make Architects and WSP. Spacehub contributed to the landscape architecture.

The walkways are accessible from several staircases, and there's a new lift, although that wasn't in operation when I visited. The detailing on the main staircase is particularly nice.

In two places where the walkways span across roads, they are cantilevered from the office buildings, with the aid of stainless steel masts and stay bars. The walkway is suspended in an attractively-shaped weathering steel trough.

I found the mast-and-stay system visually awkward - it gives something of the impression that these are independent structures, although they obviously depend on the buildings for support. There's something about the arrangement that is out of place with the rest of the scheme.

The "centrepiece" of the walkway is another trough structure which snakes across the public space, skirting the ruins of an old church. This structure is a continuous beam cantilevering from each end, and it gives the impression that it's floating in space, thanks to the lack of intermediate supports.

It would have been so easy simply to have a multi-span walkway across this stretch, in the same style as other spans, but it's definitely this curved span that puts the whole scheme at a higher level of quality.

The various spans have spaces for seating, ensuring the walkways feel part of the public realm as a place to stop and breathe rather than just another way of traversing the city as rapidly as possible.

The whole scheme has been very well designed, and is a great addition to this one small corner of central London. I certainly can't see it inspiring yet more elevated pedways - the city streets are already too constrained and difficult an environment, but it's good to see it resurrected here. 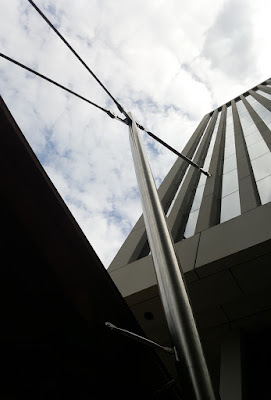 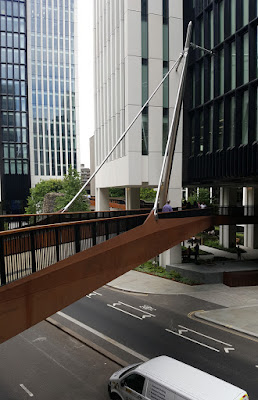 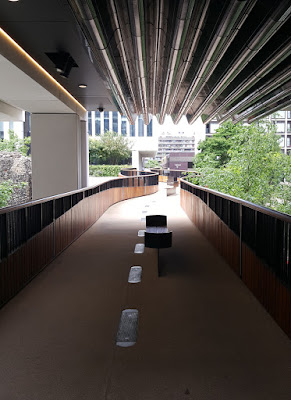 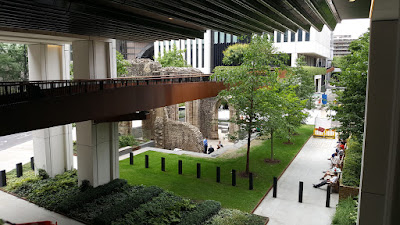 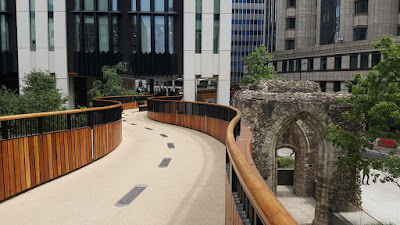 Posted by The Happy Pontist at 3:57 PM

THIS IS THE LAST OF YOUR POSTS I RECEIVED. I HOPE YOU ARE WELL. I STILL WANT TO RECEIVE YOUR POSTS. THANK YOU VERY MUCH FIOR SENDING THEM.

Yes, I'm taking a break. Too busy with work and with other things right now! I do expect to be back at some point though.