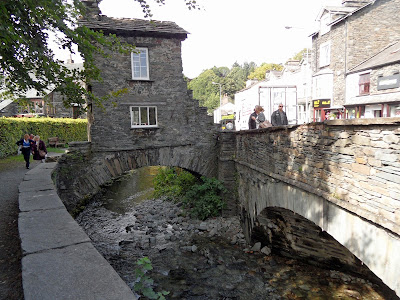 This bridge is a curiosity more than anything else.

In Bridges in Britain, G Bernard Wood described the bridge as follows: "The tiny bridge-house is a waif of Time, stranded between road and car-park".

It was reportedly built over 300 years ago as an apple store for the nearby Ambleside Hall. It was apparently constructed over Stock Ghyll in order to avoid land taxes.

In 1926, it was purchased and passed to the care of National Trust, who still use it as an information centre and shop.

I don´t absolutely want to criticize your magnificent work on bridges.
It is just that I am in doubt if the bridge-HOUSE in Ambleside is a bridge. I don´t want to criticize a tourist attraction... But I think it is worth to look at it conceptually.
A bridge is recognizable by it´s form but also by it´s use. In that sense I would include in the definition of a bridge, in the first place that it is a part of a road (or duct). Something that is or was once used to move (across something).
Of course you can make a decoration in the form of a bridge, but it is precisely that: a decoration. In this case it is a house with it´s foundations in the form of a bridge over a stream (and made this way to avoid taxes, ha ha, very good idea).