Images have been released for a proposed "garden bridge" to span London's River Thames, to be designed by Thomas Heatherwick with Arup. The bridge would cross the Thames near Temple and the South Bank, roughly half way between Waterloo and Blackfriars road bridges. The proposal is supported by London's Mayor, Boris Johnson, as well as by actor Joanna Lumley. 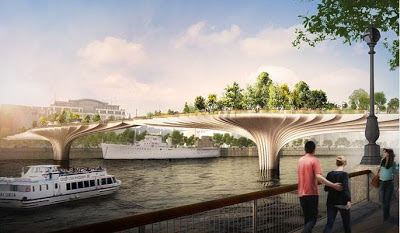 My understanding is that the scheme originated in an unsolicited proposal from Heatherwick Studio to Transport for London, who subsequently appointed an engineering partner via competitive tender to help understand and develop the feasibility of the proposal.

The bridge would form the third of a triumvirate of lavishly expensive central London pedestrian bridges, lying halfway between Hungerford Bridge (£40m) to the west, and the Millennium Bridge (£23m) to the east. The bridge trumps both structures with a reported cost of up to £60m, although it appears neither Transport for London nor the Mayor actually wish to spend any of their own money on it. It shares this pie-in-the-sky nature with the £22m Diamond Jubilee Bridge, a proposal much further west, which recently received planning consent in spite of a complete absence of any funding. 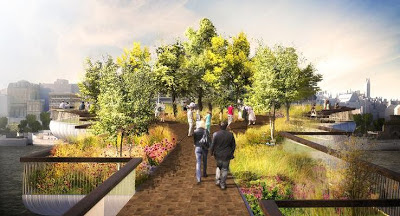 If it goes ahead, the Heatherwick bridge would surely become the most expensive pedestrian bridge ever built, by some margin.

The hope is that a sugar-daddy sponsor may step in and pay for this gigantic concrete flowerpot, as was the case with the ArcelorMittal Orbit, an extravagant folly almost entirely paid for by steel tycoon Lakshmi Mittal, and to some extent the Emirates Air Line cable car, which received the lion's share of its funding from the titular airline. Indeed, the comparison with the Orbit seems particularly apt, as being a spectacular tourist attraction where an artist's peculiar vision has been writ at such gigantic scale as to overpower almost everything around it. I would wonder whether the same sorry aesthetic compromises and pungent brashness that mar the Orbit would find their way into the Heatherwick structure. 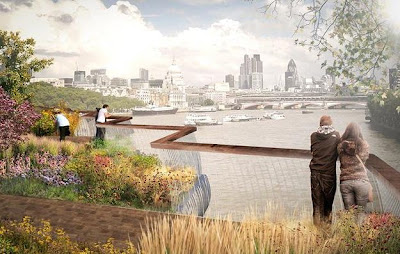 There is ﻿an element of structural logic to the Heatherwick proposal - it gives the appearance of a prestressed concrete balanced cantilever bridge an entirely reasonable solution for the site and function. Maintenance costs should be low, and the structure can be built with relatively low disruption to river traffic. It will be robust in the event of vessel impact, and invulnerable to wobble.

Heatherwick has some history in bridge design, with Paddington's Rolling Bridge, and an unbuilt proposal for a glass bridge at London's Kings Cross. As with pretty much all of his other work, these combine considerable levels of ingenuity with an open-minded, sparklingly creative approach to design geometry. Heatherwick's training was not that of an architect, but in"three dimensional design", at Manchester Polytechnic and the Royal College of Arts, and this seems to limit his scope when he works with architecture.

Both the bridges mentioned are very clever, very well crafted objects, and looking at these images, I have a sense that this bridge is imagined as an object, or at most a place, but not as part of a wider landscape. Like his other bridges, there is no sense that it responds in any way to its context - it could be plonked down in many other cities without any sense that Heatherwick would design it differently.

The highly articulated fluting of the bridge piers and soffit seems an attempt to break up what would otherwise be large areas of unattractive concrete, but will need constant illumination to retain any visual interest on an overcast, rainy day.

The ends of the bridge must (as with any of the central London bridges) land at a level well above the river bank, to maintain navigational clearances, but the proposed form, handsome in its isolation from what it connects, offers no clues as to how pedestrians will access it from the bankside below. At both ends, there are no pre-existing higher level features in the vicinity, and I wonder what ponderous impact it would have, especially on the south end which is currently occupied by a mix of low-height buildings and open space, one of the few welcome respites from London's overcrowded south river bank.

In short, I'm simply not sure that Heatherwick has the sensitivity to context to allow his vision to dominate such a significant location. He is the British jack-of-all-trades designer with the highest public profile, and it strikes me as a huge shame that nobody else is being offered the opportunity to come up with proposals for the site. The local authority's desire to use name-recognition to draw in sponsorship and obtain public infrastructure at minimal cost is understandable, but shouldn't be an excuse to adopt anything other than the best design solution.
Posted by The Happy Pontist at 8:49 PM

The results for the Kruunusillat competition are out.
Something weird happened this morning as they were published on the web: for a few hours "Debet Semper", the spain project was listed as the winner and then around 10:50 "Gemma Regalis" took its place.

If you look at the report, "Debet Semper" is still listed as the winner ... something fishy happened in Helsinki.