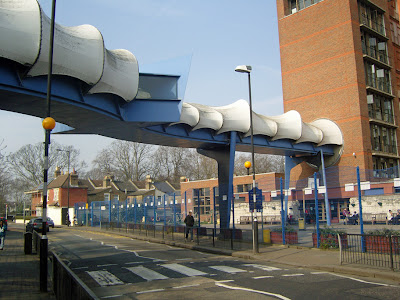 The fourth in this series of posts regarding East London bridges finally brings us to the bridge which was the reason for my visit. It’s a short distance and a few tube stops east of the Mile End, West Ham and bridges covered in the last three posts. 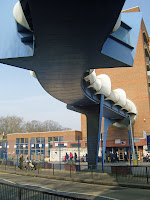 There must be few schools in which can boast a footbridge of such architectural distinction as this one. It was built in 2000 and links the two halves of a girls’ school across Plashet Grove, providing traffic-free and weatherproof access between the buildings for the students. It cost £560,000.

The designers were Birds Portchmouth Russum Architects with Techniker, and to my mind this is easily the best bridge that Techniker have designed (I’ve covered some other examples at Royal Victoria Dock, CanaryWharf, and of course in ). 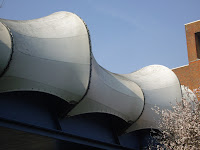 The footbridge meanders for 67m in an S-curve at first floor level, and the presence of curvature is a recurring motif in the design. Despite the fact that it is fundamentally a hard, metal bridge, comprising a half-through twin girder layout with steel decking, the bridge is overwhelmingly soft in nature, thanks to the use of a fabric membrane roof carried on curved support frames. It looks a little like a series of wagons out of a Western film stuck end to end, and I don’t mean that in a bad way. 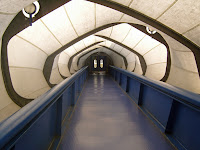 The support frames for the roof alternate along the length of the bridge, such that from any perspective, the rhythmic geometry is always interesting.

The ribbed-tunnel effect is punctured at midspan by two angular steel-and-glass belvederes. These are the only windows on the bridge, which is an unconventional approach on any modern covered footbridge. The conventional wisdom for such bridges is that users prefer transparency, but this is a bridge over an urban road – the truth is that there is not much to see, and the belvederes are therefore more relevant as meeting points than as viewing platforms. 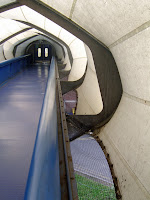 The roof membrane is not sealed at its lower edge, with a gap allowing free ventilation. This is covered by a mesh, presumably to keep out pigeons. Concern over pigeons is also apparent from the presence of an anti-perching wire along the outer flange of the main beams, which I suspect was an afterthought. Details like this are a perennial curse of the bridge designer’s life.

The roof covering lets in considerable light. It is somewhat covered in grime at present, but apparently gets cleaned every few years. In general the bridge appears well-maintained and the design to have been robust. I was told on my visit that the original drainage (which ran through a tube forming the upper flange of the main beams) failed, and was replaced by separate drain-pipes which deliver water from the roof directly to the roadway below. Drainage is another detail which can challenge even the most conscientious bridge designer. 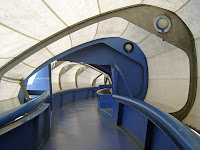 The bridge deck was noticeably prone to vibration when I visited, but not seriously so.

The bridge superstructure is visually unusual and attractive, but certainly not the only interesting feature of the design. The steel piers which support the bridge are also possibly unique, being formed out of single steel plates only 32mm thick. They are prevented from buckling by their curvature, and an example of remarkable lateral thinking.

I think this is one of ’s best footbridges, highly innovative in its design but not self-consciously so. The unusual design details are all in the service of a clearly-expressed and very attractive aesthetic.

Further information:
Posted by The Happy Pontist at 9:53 PM