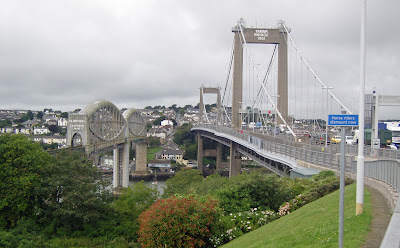 It's not often that I feature long-span bridges on this blog. The scale and complexity of major bridge projects makes them less easy to encapsulate in a short text. Smaller structures are easier to do justice to. However, in this current series of posts, there are two more bridges that it would be remiss not to include. This post will cover the one on the right, in the picture above.

Opening in 1961, and spanning 335m, Tamar Bridge was the first of three major British suspension bridges to be completed within a few years of each other, its siblings being the Forth Road Bridge (1964, span 1006m), and the Severn Bridge (1966, span 988m). Its nearest significant predecessor was the 101m span Chelsea Bridge, completed in 1937, although the longest spanning suspension bridge in Britain at the time dated back nearly a century, the Clifton Suspension Bridge (1864, span 214m) (I'm not counting the 300m Widnes-Runcorn Transporter Bridge, which is a special case).

By the standards of what had been built in American and elsewhere, the Tamar Bridge was not a major structure. The design, by Mott, Hay and Anderson, was of the old-fashioned stiffened deck-truss type, still the legacy of the Tacoma Narrows failure from two decades before.

However, this conservatism was forced on the designers by the proximity of Brunel's Royal Albert Bridge. Tamar Bridge shared its design and year of opening with the Runcorn-Widnes Bridge, which also had a very similar main span of 330m. At Runcorn, a 314m span suspension bridge was rejected in favour of a steel truss arch design as a result of wind eddies generated by the nearby Runcorn Railway Bridge. At Tamar, the wind tunnel tests showed that a small change in level of the new road bridge would be enough to solve a similar problem. 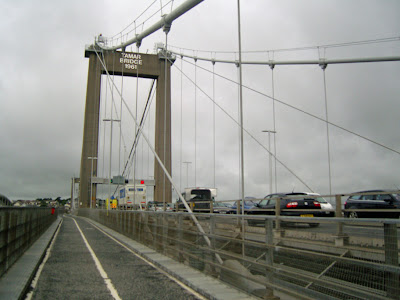 The Tamar trusses are some 4.9m deep, with a span-to-depth ratio of 68, almost absurdly deep for a suspension bridge even at the time. As built, it had only vertical hangers, but when it was widened at the end of the 1990s, stay cables were added, creating a hybrid form. Unusually, the main suspension cables are locked-coil steel ropes rather than aerially spun cables, with 31 ropes bundled together in each cable.

The design of the widening, by Hyder, involved extending the bridge deck on new cantilevers, which carried traffic during the construction period. The original concrete deck was replaced by a lighter orthotropic steel plate deck, and traffic then returned to its original lanes. The cantilevers now carry local traffic on one side, and a footway / cycleway on the other. The overall result is not just that the bridge is stronger, but also more attractive, as the main trusses are to some extent shadowed by the deck cantilevers.
Further information:

Posted by The Happy Pontist at 8:39 PM