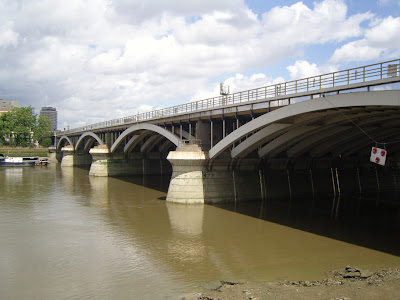 The first of a trio of bridges all within spitting distance of each other is the Grosvenor Bridge, which carries the railway lines out of Victoria station across the River Thames in London.

A bridge was first built here in 1860 as part of the Victoria Station & Pimlico Railway. Designed by John Fowler, the bridge cost £84,000 and carried two railway tracks over four 53.3m river spans (plus a number of approach spans). Masonry-faced brick piers carried segmental wrought iron arches, with six arched ribs in each span.


As the railways rapidly expanded, so did the bridge, with a first widened section completed in 1866 (designed by Sir Charles Fox), adding another 5 tracks on the east side. The structure was widened again in 1907, adding a further 2 tracks on the west side, using mild steel arches. 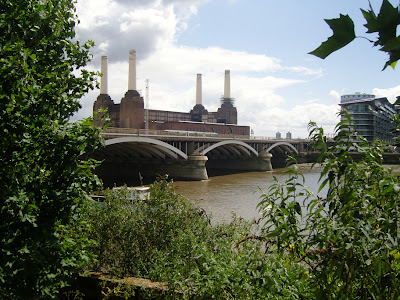 Due to the cost of maintenance, it was decided in 1958 to replace the bridge, with work taking place between 1963 and 1967, to a design by Freeman Fox (now part of Hyder, and founded by the same Charles Fox mentioned above). The bridge now consists of ten parallel bridge structures supported on common piers. The arch profile and general elevation of the bridge has remained largely unaltered since the original construction, although reconstruction and underpinning of the piers has shortened the spans to 50m each.
Throughout construction of the new bridge, the contractor had to maintain eight live tracks of railway traffic, and two of the four river spans also had to remain open to boat traffic at all times. This led to a very complex construction sequence.
The foundations consisted of a concrete raft (original bridge), four cast iron caissons filled with concrete (the first widening), and a single cast iron caisson filled with concrete (the second widening). These supported piers variously faced in limestone (orginal) and granite (widenings). During the reconstruction, the existing foundations were isolated within a cofferdam, and widened in reinforced concrete. This had to be completed in small sections as access became available.
A temporary steel truss was erected above the bridge, and used both to dismantle the original arches and erect the new arches, lifting the elements onto and off of pontoons. This worked one span and one track at a time, which is why the new bridge is built of several separate decks rather than one continuous structure. 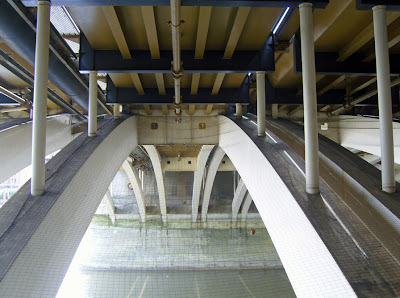 The current arches are two-pinned welded steel box girders, each 1.13m deep and 0.61m wide, with steel plates up to 31mm thick. There are two arch ribs for each bridge deck. Tubular steel spandrel posts carry an orthotropically stiffened steel deck. Further details, construction photographs and technical drawings are available in the book Railway Bridge Construction by F.A.W. Mann.
It's an essentially modern design, but I doubt that any casual observer is aware of it. The retention of the original open-spandrel arch elevations means that the bridge appears at first glance to be an unaltered historic structure. 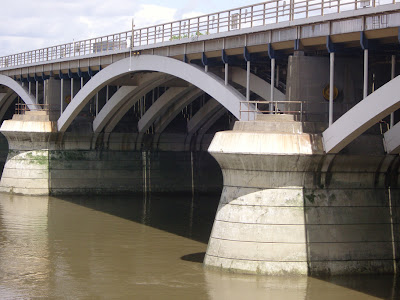 The visual design of the piers is difficult on a bridge like this, particularly where they have been widened from the original and risk looking very bulky in comparison to the steelwork they carry. They also have to look appropriate at widely varying water levels (the Thames is a tidal river at this point). I think the chess-piece shaped profile works well, particularly the way the pier face curves outwards at the top to meet the arch springings.

The spandrel columns are remarkably slender, but the transparent effect you would see on a simple elevation of the bridge is nowhere apparent, due to the sheer number of columns and the shading effect from the deck.