I've been meaning for some time to post about a side of bridge-building that rarely makes it into the non-technical let alone the technical press. These are community bridge projects, often self-built, often bridges built in developing countries without access to modern design tools or materials. They might offer some interesting lessons for developed-world bridge designers, and a wealth of interesting design resources are available.

What prompted me to finally put a post together was an excellent pair of articles in the latest Bridge Design and Engineering magazine. One covers a project in Kenya by charity Bridging the Gap - I'll cover that in a separate post. The other article features the charity Bridges to Prosperity (B2P). 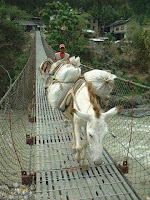 Founded in 2001, this American charity has built 50 new bridges in about 15 countries worldwide (a typical example is shown on the right). It targets sites where a bridge is not a luxury but a necessity - places where the lack of a river crossing can cut off access to education and health services when rivers become impassable. The bridges are also key in expanding access to employment and business markets, and B2P's aim is not just to build the bridges, but to leave local people with the knowledge and capability to build more.

B2P's preferred design is a lightweight steel and timber suspension footbridge, illustrated below. This is a simple, unstiffened catenary bridge design, developed by Swiss charity Helvetas, who I'll feature in a future post. It requires a minimum of imported material and is hence generally relatively inexpensive to build in locations where access is difficult (they estimate the total cost at about US$350 per metre length). It is also less vulnerable to failure during construction (e.g. due to flash flooding) than a bridge with supports in the water channel.

Manuals for design and construction, including technical drawings and specifications, are freely available online. These make great reading, especially for engineers mired in the complex bureaucratic fog that engulfs much developed-world bridge design. The focus is on simplicity, and when reading them I found it hard not to wonder whether any of the design methods, structural concepts, or construction technologies could be used outside their intended context. 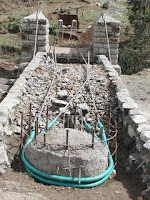 The image on the left shows the simplicity of the main cable tied around a pile-head. It reminded me of the Traversinersteg in Switzerland, where one anchorage is wrapped around a large rock. I'd think that with this kind of non-technical detailing, one thing that will be lost is long-term durability, but I'd guess it would be cheaper to rebuild one of these bridges than to carry out complex maintenance on protective coating systems. 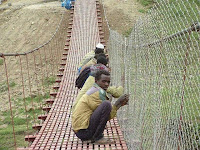 The picture on the right shows the very simple hangers, which are connected to the suspension cable simply by being hooked around it, and also the mesh infill "parapet" system. This also will lack durability but is easy to repair or replace.

That's one area where the context does matter: the economics of mend-and-make-do are more attractive where labour costs are relatively low, and where the costs of maintenance-induced disruption are low. In the developed world, closing a bridge (or the obstacle below, more likely to be a railway or highway than a river) is hugely disruptive, and designers must therefore balance initial capital and ongoing maintenance costs very differently. 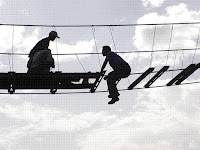 There's also the question of cultural attitude to safety risk (image, left), with these bridges being built in ways that clearly wouldn't be acceptable in many countries. It would be interesting to know how many fatalities or injuries have occurred building B2P's bridges, as the design minimises material cost at the expense of maximising the requirement to work at height. I'm not sure whether developed countries value life more highly, or are simply over-protective and risk averse. Perhaps it's the same thing.

The charity continues to push itself into new countries, with work underway or planned in Guatemala, Liberia and Timor-Leste. Much of the work is done by volunteers, and B2P raises money both from sponsors and via donations online. I think they're doing something really quite marvellous, and wish there was a UK equivalent (although I'm certainly not offering to set one up!)
Posted by The Happy Pontist at 8:03 PM

Hello, they showed some of the Calgary bridges in this news story. Mine was not shown..sigh.
I would love to hear your initial thoughts. About 6:09 in.

I guess mine will not be one of them. I did not meet the documentation requirements. Oh well.

So I posted my idea, simple as it is compared to the others.

I've replied to these comments at Accelerated Bridge Construction.