I was in Shropshire recently, and had the chance to visit the Iron Bridge at Coalbrookdale. Built in 1779, this is the oldest surviving cast iron bridge in the world.

It wasn't the very first metal bridge - an iron bridge was designed in Lyons in 1755, but not completed, while in 1769 iron bridges were built at Kirklees Hall in Yorkshire (spanning 20m), and over a canal at Boroughbridge in Yorkshire. English Heritage still have a sign on the Coalbrookdale bridge proclaiming it "first iron bridge in the world", but what do they know?

Designed by Thomas Pritchard, and constructed by Abraham Darby III, the Iron Bridge was built at the heart of an area pioneering the development of industrial-scale iron smelting.

Today the bridge is recognised as a key monument to the Industrial Revolution - the River Severn Gorge and several other local sites form part of a World Heritage Site; the Iron Bridge is Grade 1 Listed; a Scheduled Ancient Monument; and an ASCE Historic Civil Engineering Landmark. But even when it was first built, the 30m span bridge was recognised as a marvel.

There's no meaningful way to judge the success of this bridge design other than by the mere fact of its achievement at all (without precedent), and its survival for 230 years (assisted by some largely invisible remedial work over the years). Its appearance and construction borrowed heavily on carpentry principles, and its filigree, open appearance was quickly superseded by the stronger designs of Telford, Rennie and others. While it was widely imitated (near-exact replicas were built both at Worlitz and at Raincy, near Paris), it was a jumping off point for others to improve upon, not a definitive prototype.

If pressed to pass judgement, I'd point to the unfortunate peak at the crown as one flaw (a vertically curved deck would look better), and while the south arch spans today look very fitting, these were added several years after the bridge was first built - it originally had a much heavier masonry abutment at this end. However, what I find most remarkable is how aesthetically attractive it is (partly a result of its picturesque setting), especially given that many other prototype bridges in new materials are far more awkward. It's a great shame that similar devotion to appearance isn't being given to present-day innovations, such as fibreglass footbridges, for example. 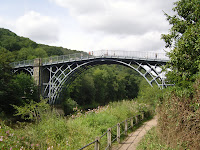 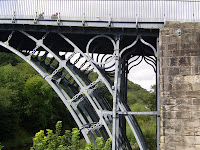 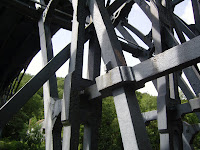 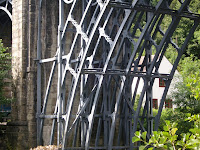 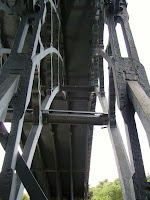 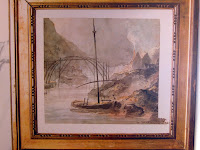 There has been a significant amount of research conducted into its construction, which might be of interest: