In certain other fields of technology and design there has been a huge trend towards open-source development over the last decade or so. Embraced enthusiastically by software hobbyists, it refers to the development of software where the source code is publicly available, and which can be freely redistributed, modified and used. Open source software is usually developed collaboratively, often by unpaid volunteers.

There are few parallels in the engineering or architectural design world, but one is the design charrette. The charrette process involves a diverse group of designers working collaboratively to propose and develop ideas, with the philosophy that several heads are better than one.

I hadn't heard of it being applied to bridge design, until I stumbled across its use for a proposed footbridge in Toronto. The background is a private developer's proposal to build a new footbridge across a railway corridor and connect to the new waterfront Cityplace development. Their plan to build a relatively conventional truss structure (as pictured, above right) has sparked the ire of the city's designerati, who see the cost-conscious choice as an affront to civic aspiration. 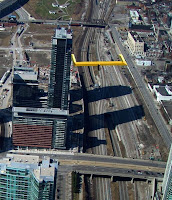 There's little doubt that it's a challenging site, and that aesthetics may play second fiddle when the difficulties of meeting the technical constraints are considered. The rail corridor is 110m across (see image on the left showing the proposed bridge location), with only a single possible pier location due to the number of rail tracks present. The bridge must be 11.7m above the tracks due to problems with train signal visibility, which in turn leads to a need for extensive ramps to approach it from the adjoining streets. The basic site plan is available online [PDF]. Building a bridge over the railway without closing it for an unacceptable period would be by far the biggest difficulty, particularly as nearby buildings might rule out a conventional launching option.

The charrette organisers set up a dedicated website to attack what they call a "box truss" (not something I've heard of, but never mind). The briefing for the charrette simplified the difficulties of building the bridge (asking, for example, for it to be possible with "no disruption of rail service", which would be impossible at this site), but was clearly less concerned with getting a buildable design than with getting ideas which offered more inspiration than the bog-standard proposal.

It's not entirely clear if there ever really was a bog-standard "box truss" proposal - Councillor Adam Vaughan responded to a post on Spacing Toronto, stated:

"Let me be clear. It will not be a truss bridge. It will be a sculpture that functions as a bridge and a glorious gateway in and out of the adjoining communities and the city."

To be designed by an artist, no less, because clearly they'll be far better aware of the intense difficulty of securing the railway body's permissions than would the entrants to the charrette. I suspect the number of 110m long bridges over railways designed by artists could be counted on the fingers of one hand. If you chopped your hand off first, that is.

Anyway, let all that pass for a moment. How successful was the charrette initiative, and how did it really differ from a "normal" bridge design contest?

The entries are summarised on the Torontoist blog, and the full gory detail can be found at the Urban Toronto forum. A few of the entries are included below. In practice, this was indeed a beauty parade rather than a proper charrette - the entries are separate, weren't collaboratively developed, and as a result few of the participants seem to have learnt from their fellow entrants' flaws. That's a disappointment, because I think there would have been the potential for something interesting to develop in a true design charrette arrangement.

Amazingly, despite there being no prize money, fourteen entries (of varying quality) were still submitted: just how much time do some people have on their hands? This sort of contest tends to rule out anyone with real professional understanding of bridge design (either engineering or architecture), as they are likely to have paying work to occupy their time (unless they're all credit crunch victims, of course). A surfeit of time over experience shows, very painfully, in most of the submissions. That's the lavishly rendered winner there on the right, by the way, not that it really matters. 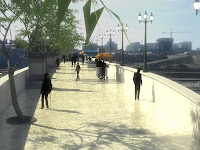 Most of the designs seem to ignore the need for approach ramps, although finding a clever way to deal with the ramps would be a key issue for any real design. Many of the entries ignore the necessity for the bridge to be fully or semi-enclosed (to prevent people dropping bricks on trains, or gaining access to the railway, see left for one inappropriate design). Of those that do consider it, they generally give no thought to maintenance, with rippling glass walls which would be a nightmare to keep clean or to repair the inevitable breakages. There's also lots of emphasis on lighting, with the winning design proposing "spectacular light shows" on its underside, something the railway signalling people would undoubtedly prohibit. 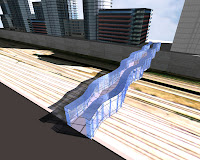 Most of the designs give little thought to what form of structure might actually be required to span 110m in two hops - several designs clearly give it no thought at all. What possible value is a gorgeous rendering of something that in reality would need to be disfigured with hundreds of tons of steelwork in order to stand up? There's at least one example of a feasible design for this sort of footbridge to be found online, so it certainly can be done.

Despite the formidable technical constraints, most of the entries would be very difficult to build over a railway, and several would involve considerable disruption e.g. cable-stay bridges with a central mast (quite how do they imagine materials would sprout from that mast?).

In fact, the entries resemble to a great extent the sort of thing which is now often submitted to proper bridge design competitions, such as the open contests run by RIBA, which similarly attract every architecture-student-and-their-dog. It's all empty style with no content, fed by the widespread notion that bridge design is essentially similar to fashion design - don't worry about the anorexic skeleton holding it up, just look at the clothes. Engineers (and wiser heads amongst architects and lay observers) who don't mind running the risk of spluttering their coffee all over their keyboards should read the comments on the Urban Toronto forum - rivers of praise for computer renderings that could never possibly be built. Not even on Pluto, where I believe the gravitational acceleration is more favourable than what we have to deal with here on planet Earth.

As a professional bridge designer, I strive not be irritated with well-meaning amateurs, particularly where they have a genuine enthusiasm for higher quality urban design. Having designed and had built several bridges in the railway environment, I clearly have a perspective that they don't (not to mention the advantage of understanding the real-world aesthetic implications of w.L2/8, and all its little brothers and sisters). But my irritation here comes from two points. 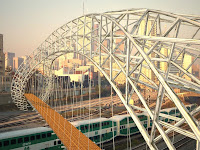 Firstly, this charrette is simply a lost opportunity. Before I saw the results, I found the initial idea very interesting: a collaborative rather than authorial vision; the opportunity to involve the public in bridge design in a more direct way; the hope of multi-mind brainstorming to create a sort of super-feasibility study. I think the idea remains interesting: there's something here to explore in the future which the Toronto contest hasn't achieved. One of the great flaws of the traditional bridge design competition format is that entrants have to settle on a "final" vision at a very early stage, and all the positive aspects of the traditional single-designer feasibility study approach are lost. The design charrette may be a way to put that right.

Secondly, the Toronto charrette makes clear in microcosm how society as a whole sees bridge design. All the things that concern professional bridge designers (buildability, efficiency, maintainability, expression and optimisation of structural form etc), are meaningless to Joe and Jane Public, let alone to Joe and Jane Student Designer. Instead, it's all about shape, material, contextual intervention - ideas that can work well in building design, where the skeleton really is largely there to hold up the clothing, but which often translate poorly to bridges. The architect as fashionista has won in the court of public opinion - if the Toronto footbridge design charrette is genuinely representative, then there's little hope of engineers ever reclaiming a serious public influence and voice in matters of landmark bridge design.

So, to return, at last, to where I began, are we ready yet to open source bridge design? If that means opening it to unpaid amateurs with no real understanding of what bridge design actually requires, then I'd say we're definitely not ready - it would be like having open source software developed by poets. (Clearly, you don't have to understand differential calculus to design a bridge: I have various architect friends and acquaintances who demonstrate both that bridge design can be learnt by the less numerate and also that a dash of poetics can often be a very good thing.) Getting the non-specialist designers and the general public to understand that bridge design is more than just the product of some fancy digital rendering software - that's the real challenge, and one it's hard to see being met any time soon.

Where next for the Cityplace footbridge itself? The "design" community seems pleased with their efforts, entrenched in their opposition to the "box truss" (ironically, the very type of bridge that those with an interest in history and understanding of bridge technology are struggling to preserve elsewhere in North America). The powers-that-be seem convinced their artist, Francisco Gazitúa, will come up with something that meets the conflicting demands of the vocal anti-trussers, the railway company, and the poor old developer, who will be paying for the final result. A design should be made public this summer. I'm not convinced those demands are at all reconcilable, so expect further contretemps in due course.

This is a great post about the advantages and pitfalls of charrettes.

I have been in a few of these (favored by architects) where the public is encouraged to brainstorm ideas for the new design.

My problem with the system is, the public doesn't really understand bridge design.

Imagine having the public sitting around and making suggestions for a patients medical treatment. A bridge is not on the same scale of course but a lay public may not be the best group to work with.

I always wanted to sit with some really knowledgeable engineers and discuss a design but even that is difficult. Unless you are really involved in the design it is problematic to understand all the complexities surrounding the decisions.