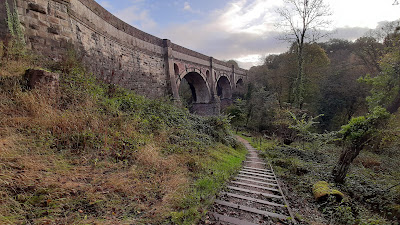 Yes, yes, I know, it's not really in Manchester. Want to make something of it? No? Good.

It's sometimes difficult to imagine how the pre-industrialised landscape would have looked near the end of the 18th century. Some canals had been constructed earlier (e.g. the Bridgewater Canal opened in 1761), but canal mania only really took off in the century's final decade. The Peak Forest Canal, authorised by an Act of Parliament in 1794, was part of that explosion of canal-building.

So far as was possible, canals needed to be level to be economically viable. The Peak Forest Canal connected mines at Dove Holes to Manchester, with two level stretches of water (the Upper and Lower Peak Forest Canals) separated by a 64m tall flight of locks at Marple. Immediately south of the locks, the Lower canal crosses the valley of the River Goyt, and between 1794 and 1800 a huge aqueduct was built here.

It must have been a tremendous endeavour, considering the scale of the stone blocks that make up the finished structure. The enterprise was largely promoted by industrialist Samuel Oldknow, and the engineers were Benjamin Outram and Thomas Brown, and William Broadhead, Bethel Furness and William Anderson were appointed as the contractors. It is claimed to be the tallest masonry aqueduct in the United Kingdom, and over the six years of construction, seven construction workers died.

The aqueduct's most distinctive visual feature is the series of circular openings in the spandrel walls of all three spans. These were presumably intended to reduce weight, and were not a new idea: William Edwards had used them for his fourth and final bridge in Pontypridd in 1756; John Smeaton included them on Coldstream Bridge in 1767, albeit filled with loose stone. No doubt there are other examples. They add visual interest to the bridge but I don't think they lighten its appearance: compare Rennie's Lune Aqueduct, completed in 1796 while the Marple structure was being built, which scarcely looks much heavier.

Tie bars were inserted in the central span in 1860 by engineer Charles Sacre. Use of the canal had declined during the 19th century, with Marple Railway Viaduct being built alongside the aqueduct in 1863.

Decline eventually lead to ruin, with one spandrel wall of the aqueduct partially collapsing in January 1962. British Waterways proposed demolishing the structure and replacing it with a pipeline, but additional funding was found from the local authority to rescue the aqueduct, and in 1966 the restored bridge was declared a Listed Building, Grade I. The canal itself was rescued from dereliction and reopened in 1974.

The aqueduct was altered again in 2018. Until that point in its history, the aqueduct had only one parapet, on the towpath side. The other side had only a very low wall. According to the Canal and River Trust, people had been recorded nearly falling from that edge, and some people were even playing a dangerous game of leaping across the canal to land on the unsecured edge. 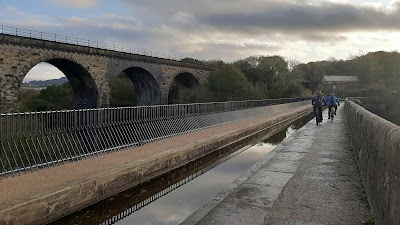 It was agreed to add a new parapet, designed by Knight Architects and Arcadis, and manufactured by Bisca. This is a bespoke design in stainless steel, with the top rail left unpainted, and uprights painted matt black. In a nod to the Peak Forest Canal's benefactor Samuel Oldknow, the arrangement of the metalwork evokes the warp and weft of cotton-weaving.

It feels a little odd, having such high-quality metalwork in a place where the ordinary public are remote from it, but it must have been some challenge to navigate the demands of parapet standards and the difficult constraints of modifying such a historic structure.

Viewed along the aqueduct, the new parapet gives an impression of solidity, while viewed looking across, it is much more transparent. Engineers will note that the location where the woven bars intersect is the weak point. I did wonder if the design is not a little over-done when something more minimal may have sufficed, but I didn't find it too objectionable. 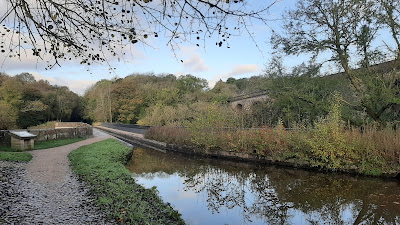 Posted by The Happy Pontist at 6:46 PM

I must admit I'm not a fan of the parapet. Presumably the people who had "been recorded nearly falling from that edge" weren't on board boats. Some people have to spoil everything. I hope no similar modifications are proposed to the Pontcysyllte Aqueduct. That has even less separating the canal from the drop: just the edge of the trough. The unenclosed side of the aqueduct is one of the things that makes crossing it, even on foot, a special experience, and I imagine it would have been the same with the Marple Aqueduct.