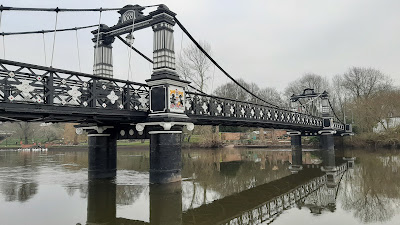 Don't get too excited by the title of this post: I only visited one bridge in Staffordshire recently, so the title is just in expectation that I may return and find others in the future. If you'd like to suggest any bridges in the area which I should visit, please respond via the comments to this post.

Historically, the River Trent formed the boundary between the counties of Derbyshire and Staffordshire, and a ferry served passengers between the town of Burton and the village of Stapenhill. In 1865, plans were laid for a bridge to replace the ferry, but nothing came of it until 1888, when Michael Arthur Bass, the 1st Baron Burton, agreed to fund the new crossing. His bridge was formally opened on 3rd April, the following year. In 1891, it was extended with an 81-span iron viaduct across the river's extensive flood plain (pictured).

The main river crossing is a suspension bridge with a main span of 120 feet and side spans each of 60 feet. It was built by local engineering firm Thornewill and Warham, who contracted Edward William Ives for its design. Ives, in turn, obtained the assistance of Alfred Andrew Langley. Suspension bridges were hardly new in the late 19th century, but Ives and Langley came up with something that departed significantly from what might then have been "normal" practice.

It's an unusual structure in two main ways. It is a self-anchored suspension bridge, where the main suspension "cables" are anchored not into the ground, but to the ends of the deck. There can't be many such bridges in the United Kingdom; the other examples that come to mind are Chelsea Bridge, built in 1937, and Derry's Peace Bridge, completed in 2011.

Ground anchorages are normal for suspension bridges because they allow the suspension cable or chain to be erected first, and the bridge deck to be assembled in sections afterwards. This minimises work within the river, to whatever is needed to pull the cable or chain across (and that can be done in stages) and to erect small deck sections. A self-anchored suspension bridge requires the bridge deck to be built first, usually necessitating extensive temporary works in the river. The choice here might have been down to poor foundation conditions within the river flood plain.

The suspension cables are also neither chains nor wire cables, but formed from riveted wrought iron plates. Bridges of this type are exceedingly rare, and the only other one I've visited is the 1910 Grunwaldzki Bridge in Wrocław, Poland.

The Stapenhill Bridge uses three layers of plates, one layer being jointed at each hanger position, so the strength is equal to two plates throughout. Judging from the bridge inventory at Bridgemeister, UK suspension bridges of this period were mostly built using wire cables, although some were still constructed using iron eyebars (e.g. Hammersmith Bridge, 1887). Perhaps the choice of riveted plates was driven by Thornewill and Warham's capabilities. 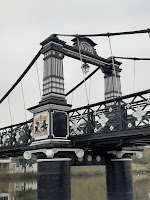 The suspension elements are supported on cast-iron towers. Although these are impressively ornate, they are are considerably diminished compared to the original structure - some historic photographs can be found on the Burton-upon-Trent local history website. Those show taller cappings both on the towers and at the ends of the bridge.

The bridge deck is supported from lattice trusses on each edge. These pass through the tower portals, with the result that the suspension "cables" are inclined inwards. This geometry imposes transverse bending on the lattice trusses, which is not the most efficient arrangement. The hanger bars are wrought-iron rods, except at midspan where there is a fixed connection between the chains and the edge trusses.

The deck itself consists of wrought iron transverse lattice cross-beams (through which service pipes are threaded), supporting timber flooring. New parapets have been added inboard of the main edge trusses: I guess this was part of the major refurbishment in 2016, with works designed by Inertia Consulting.

I'm not sure I could describe this as a beautiful bridge, but it is characterful, and good-looking in its refurbished condition. When I visited, the bridge and its approach viaduct were very well used, and hopefully it has a long future ahead. 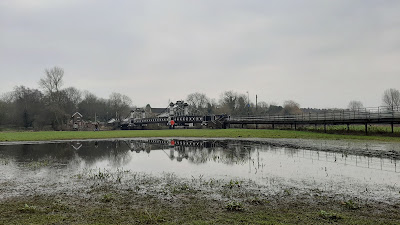 Posted by The Happy Pontist at 7:28 PM