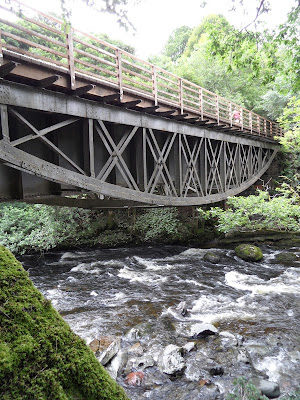 The Cockermouth, Keswick and Penrith railway line (CKPR) was designed by the famous (or infamous) Thomas Bouch, an engineer later to become notorious following the collapse of his Tay Railway Bridge. His bridges on the Keswick to Threlkeld section of line have had a happier fate, with eight splendid metal structures surviving to the present day, some decades after the railway line was closed to traffic.

I didn't have time to visit all eight bridges, but you can read more about them in Paul Dunkerley's Bowstrings over the Greta, which has a useful map, photographs, and further details. I've relied on it extensively in this and the forthcoming posts. 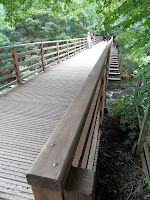 Bridge 66 is the only double-span bridge to survive, and comprises two spans of "inverted" bowstring truss construction, reportedly Bouch's preferred solution for this line, wherever clearance above the River Greta permitted its use. Nonetheless, he apparently only adopted this design for one other bridge, at Penicuik in Scotland.

The spans are of 57 feet and 89 feet, and the bridge originally carried only a single railway track. In recent years, like the others, the bridge has been adapted to carry a foot and cycle trail by replacement of the deck with a new timber walkway. 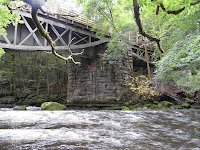 It is possible to pass over this bridge with no idea of what lies below, and indeed that's precisely what I did when I first cycled over it. However, it's well worth finding a way down to the river bank to see the bridge properly, as this bridge, along with three other inverted bowstrings on the line, is of a very rare type. My travelling companions called them the "upside-down" bridges, but this form is more economical than the conventional "upright" bowstring bridge, as the curved members are placed in tension and less material is therefore required to resist buckling. 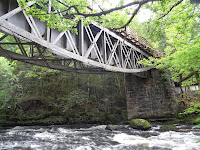 The bridge has an interesting combination of robustness and elegance, and this isn't marred by the presence of a single plate girder in between the two trusses. This was added in 1931-32 to enhance its strength. It must have been a very difficult construction operation, although the photo here shows that a very neat slot was cut in the abutment to accommodate the girder bearing.

I wasn't able to get photographs that show this whole bridge clearly, but some of the other bridges on the route will hopefully show a few more details for the form.

Posted by The Happy Pontist at 7:06 PM

As a bridge designer, I would be really interested to see how the interaction between the bowstrings and the plate girder was analyzed back in the 1930's.

You could probably get a reasonable idea of live load share simply by estimating deflections for each girder under an assumed transverse load distribution, depending on how stiff the transverse members are above the girders.

Yes, this seems quite simple and straightforward to us. But if I'm not mistaken, the analysis of grillages we use nowadays was pioneered by Leonhardt in the second half of the 1930's. But the question of transverse load distribution still had to be solved earlier.

We agree that this is probably the easiest way to estimate the load distribution.
In my first comment, I wished to express that I always find it interesting to see old statical calculations, from before the "computer age".