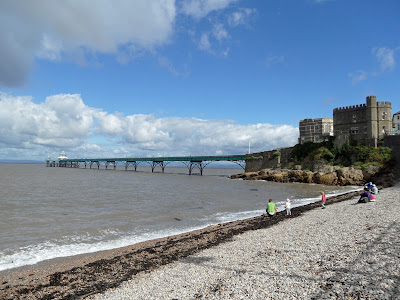 The pier at Clevedon is one of my favourite bridges to nowhere. Built in 1869, its elegant iron arches make me think of the Pont des Arts in Paris. There are eight spans, each 100 feet in length, comprising a wrought-iron superstructure supported on cast iron screw piles. It seems impossible that such spindly supports could both carry crowds of Victorian pleasure-seekers and withstand the force of storm-tossed waves. 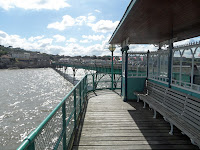 However, other than various minor alterations, they did indeed withstand them, and the collapse in 1970 of the seventh and eight spans from the shore was man-made rather than due to the forces of nature. The bridge was being load-tested for insurance reasons, with water tanks providing a load of 2 kPa, and while the first six spans passed the test, the seventh failed, dragging the eighth down with it. This seems a very low load capacity when you consider that a modern pedestrian bridge would be designed for 5 kPa loading, plus a safety factor (so, typically 7.5 kPa), but this simply highlights the conservatism of current codes. 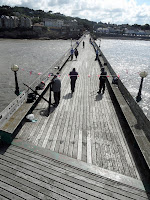 Another aspect of the pier which would not comply with current codes is the presence all along both edges of continuous bench seating. This is prohibited on any modern footbridge because a child can stand on the seating and no longer has safe containment. At Clevedon, a sign simply asks visitors to supervise their children; it should also be noted that the pier is a private space, with a toll paid for access, rather than a public “crossing”. 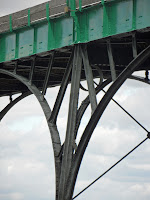 When built, the pier took advantage of the availability of “top hat” section Barlow rails, surplus stock from the South Wales railway. These were riveted back to back to form columns and longitudinal arches, supporting wrought iron plate girders along the edge of the deck. They're easily visible in the photograph on the right, showing the original pier construction. 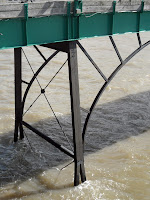 Although the reconstructed spans match the general elevation of the original spans, both the girders and support framework are in modern welded steel, and to my eye look out of place on a Grade I Listed structure. If you compare the photograph on the left with the previous one, you can see some of the differences: the column and arch sections are cleaner, with no rivets and less interesting shapes. 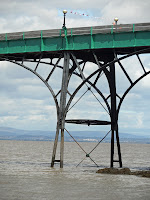 Another photograph of the original construction shows further differences. The trestle supports have different horizontals at mid-height, with a straight bar on the new sections (above left) in place of lenticular struts on the old sections (right). The new trestles have a horizontal cross-beam at the top, while the old sections are arched at the top. Coupled with the loss of detail in the main deck girders, I find the pier reconstruction disappointing in its lack of adherence to the original construction. You wouldn't realise this from most websites or texts, which give the impression the pier was rebuilt exactly in its original form. 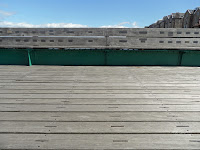 As with Southport Pier, after the load testing collapse the local council at Clevedon proposed to demolish the pier, but public outcry eventually won a reprieve. Some of the funding for rebuilding, and further refurbishment, was provided by many individual donations, commemorated with plaques inlaid into the deck planks and mounted on the rear face of the benches. This crowd-funding was supplemented by grants, and I think it's a great way of raising money and demonstrating popular support for a project.

Although this is a pier, not a bridge, it clearly has many similarities. I wanted to feature it here because it's such a supremely elegant structure, with a slenderness and loveliness of form that few such structures can match. Poet Sir John Betjeman described it as "the most beautiful pier in England", and it recently won the "Pier of the Year Award" for 2013. Money is currently being raised to fund construction of a new visitors centre. 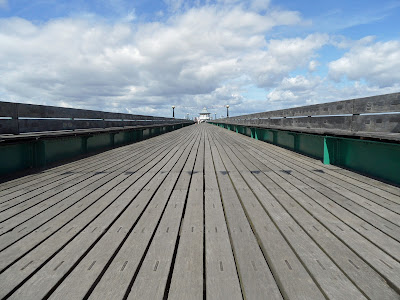 Posted by The Happy Pontist at 9:22 PM