Time for a few quick links to bridge-related news from elsewhere. I've been out visiting some bridges myself, so hopefully will start blogging those over the next few weeks. 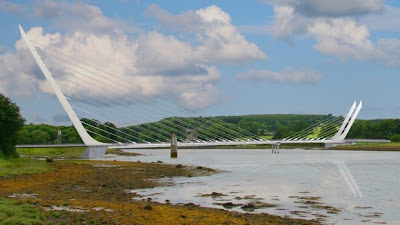 Considering all the fuss around the cancellation of the River Wear crossing, you may be forgiven if you're unaware of yet another "iconic" bridge scheme which has hit the skids for very similar reasons. This is a project for a new bridge between the Republic of Ireland and Northern Ireland, and in an odd parallel to River Wear, it is also a cable-stayed bridge with no back-stays, although nowhere near as adventurous as in Sunderland. The scheme had a reported €17.4m budget, but tenders have come in the range €26m to €40m, indicating a staggering failure to anticipate the realities of building this type of bridge (the disparity between tender prices is also quite remarkable). The most obvious comparison is Calatrava's Puente del Alamillo, which experienced such significant cost escalation that only one of two planned spans was built. What with this and Sunderland, the cost estimating profession should be hanging their heads in shame.

Parkland bridge to be designed without controversial arch
Funny news from Dallas - a hospital link bridge is to be redesigned without its supporting arch, because it's US$5m cheaper. So what on earth was the arch doing in the first place? This idea that major structural elements are only merited as decoration is quite absurd, but sadly not atypical of the American approach to bridge design.

Linking up London: sensational new bridges will create new communities and riverside homes
You can always rely on Homes and Property for the best summaries of bridge news. Surprisingly informative.

Victorian Footbridge Restored To Former Glory
Canford Suspension Bridge, in Dorset, has had a makeover which sounds basically like a complete reconstruction.

Thousands watch Whangarei bridge opening
Something of a British success story for this new opening bridge in New Zealand, with both Knight Architects and Eadon Consulting involved. There was also a very informative article about the project in New Civil Engineer recently, but I can't find it online.

Consol bridge soars, sways 100 feet above the valley floor
A very generous donation has given the Boy Scouts of America a spectacular new suspension footbridge, where people can walk on the cables as well as on the main deck. There's a video on YouTube, and a nice article in Wire Rope News.
Posted by The Happy Pontist at 5:34 PM