I've recently had the chance to visit a few interesting bridges in Cumbria, in the north-west of England, and will spend the next few posts reporting on them. I've previously featured two other Cumbrian bridges, the bridge at Aira Force waterfall, and the remarkable Fisherman's Bridge.

The majority of the bridges I'll feature over the next few posts form a set, as they all either span over or carry a foot / cycle trail running between Keswick and Threlkeld, which was formerly part of the Cockermouth, Keswick and Penrith Railway. This railway line was completed in 1864, primarily to transport minerals although also serving as a passenger line until its closure in 1972. 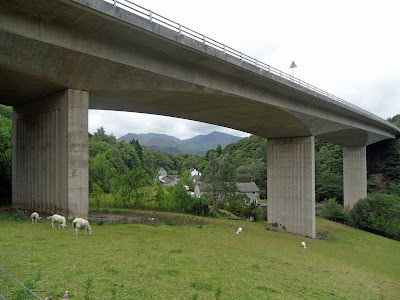 Greta Bridge is part of this set but also the odd-one-out, as it spans over the former railway line but was built much later, opening in 1977 as part of the A66 highway bypass to Keswick. It was designed by Scott Wilson Kirkpatrick and Partners, and built by Tarmac Construction. Its chief claim to fame is that in 1999, it was voted Britain's "best concrete engineering structure of the century" by members of the Concrete Society. It was claimed to be one of the first bridges to have been designed using finite-element analysis. New Civil Engineer's report on the award stated: "The structure, designed purely by engineers with no architectural input, is renowned for its aesthetic qualities which ensure it blends well with the surrounding Lake District countryside." 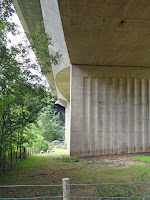 Greta Bridge has four spans for a total length of 220m, and carries a dual two-lane carriageway. It is a concrete box girder of varying depth, superelevated to suit the highway curvature. The boxes are trapezoidal in cross-section. It's the lower, inclined part of the webs which give this bridge its unique character, as in combination with the curved soffits to the girders, they create a lovely series of "scalloped" surfaces defining the lower edge of each span. It's rare to see a concrete box girder bridge which is so visually successful. 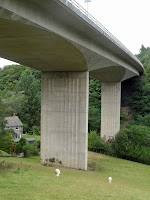 It isn't only the box girders that provide the charm to this bridge. The concrete piers are rectangular in cross-section, but indented with a series of dished "flutes" on their long faces. These provide some texture to break up what would otherwise be a very large, flat concrete area, they emphasise the verticality of the piers, and the curved profile to the flutes complements the curved elevation of each girder span.

I personally think it's silly to claim that this was the best concrete bridge in Britain of the 20th century, but it's a very charming structure, and certainly an unusually high quality design for its type.

I was editor of ‘Concrete’ magazine at the time that Greta Bridge was voted by Concrete Society members as the ‘best civil engineering structure of the century’, so can give a little more background.

I thought we should do something 'concrete' to mark the Millennium, and inviting our readers to nominate and vote for the best buildings and civil engineering structures of the 20th century seemed a good way of looking back at some successful concrete structures. We didn't get a huge response from readers, so I put forward a number of suggestions as a starting point for them to vote on.

Some of these were fairly obvious candidates, Concrete Society award winners for example, but a few structures were nominated by readers, including Greta Bridge, which the designers put forward. The number of votes cast for the various buildings and structures was not enormous, so we couldn’t claim to have got a rigorous view of all the possible structures, but the winning building was Coventry Cathedral, and the winning civil engineering structure was Greta Bridge.

I was pleased to publish two articles in the first issue of ‘Concrete’ in the new Millennium, giving the design and construction perspectives of the Bridge. The first was by designers Scott Wilson Kirkpatrick and the second was by David Quinion and two colleagues. David was closely involved with the Concrete Society’s technical committees at the time, and had been chief engineer for Tarmac Construction, who had built the bridge. David was also been primarily responsible for drafting the BS Code of Practice for Falsework at the time the bridge was built. Their article set out the very considerable challenges of actually building the bridge, and the way in which the lessons from the project were disseminated via the new Code.

Nick, many thanks for these very interesting comments. I've now seen the CONCRETE articles and will put a short update on this blog post as soon as I get a spare moment.