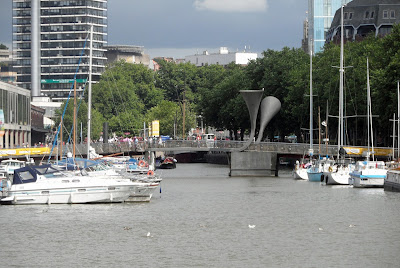 I've badged this and the previous post as "Bristol Bridges", as if you're going to get a whole series of bridges in the area that I've visited. Well, actually only the two, for now anyway. But I do plan to make a return visit to the area and cover a few more. 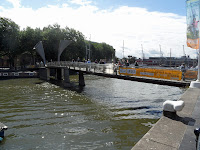 Pero's Bridge is a relatively recent addition to Bristol's scenery, having opened in 1999. It spans an inlet of Bristol Harbour, and undeniably improves pedestrian access in a very busy part of the city. Designed by Arup with artist Eilis O'Connell, it features an 11-metre long bascule span, flanked by two fixed spans. 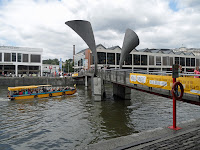 Visually, the most obvious feature of the bridge is the two large "trumpets" forming the rear half of the lifting deck. These provide a counterweight mass to balance the main deck, so that minimum force is required to open or close it. 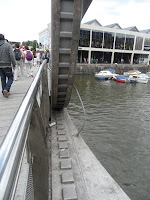 The bridge is unusual in being a modern implementation of the rolling bascule, which rocks back onto its supports like the exaggerated motion of a rocking chair. Teeth are provided on the support beams to ensure it does not move out of tolerance when it does so. Bridges of this type were once common: I've visited those at Queensferry and Liverpool previously. One advantage of the form is that the centre of gravity of the rolling span can be positioned so that it lies to the span-side of the centre of rotation when the bridge is down, but so that it moves to the rear-side of the centre of rotation when the bridge is up; in both cases, it holds the bridge secure in the rest position. 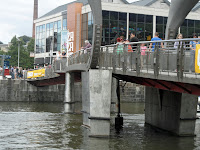 The bridge is operated by a hydraulic piston below deck level, which remains above the water level at all times (the level being constant in Bristol Harbour). In the photograph on the right, it can be seen that the deck is a box girder with strutted cantilevers. Much of the detailing below deck level is visually awkward, particularly the main pier supports for the roll path, including their uneven relationship with the other pier. 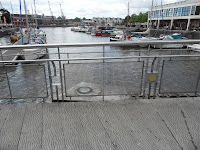 I find the bridge unconvincing overall. It's a reasonable engineering solution, but the counterweight trumpets seem awkward to me. To some extent their shape is compelled by the engineering demands - the bulk of the weight has to be high up so as to balance the main deck properly. Other elements of the bridge are over-fussy, such as the parapets, which with their complex array of posts, bars, rails, and mesh panels, offer little in the way of elegance.

The bridge is named for an African slave, Pero Jones, brought to Bristol in 1783 by a local merchant.

Posted by The Happy Pontist at 8:09 PM