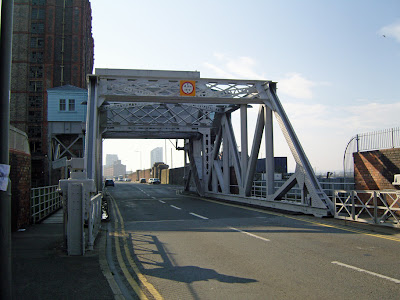 My Merseyside journey continued south from Bootle into the centre of Liverpool. Travelling along Regent Road, I crossed the entrance to Stanley Dock via this bridge. It's of the Scherzer Rolling Lift type, a patented design where the bridge deck rocks back onto a roller girder in order to raise it to allow vessels to pass through. It's a little like a rocking-chair, pulled back by mechanical arms.

I've previously reported on a twin-leaf example of the genre, Queensferry Bridge, although that is no longer able to open. The bridge at Stanley Dock has only recently been refurbished, at the cost of £600,000. It was originally built in 1932, and allowed to run into disrepair by the owners, Peel Ports, leading eventually to its closure in May 2008. In 2010, repairs were carried out, the machine house re-roofed, and everything given a lick of new paint. The work won a Historic Bridge and Infrastructure Award earlier this year. 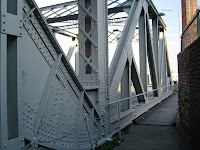 The rolling girder can be seen in the photo, complete with copious riveted stiffening - the entire bridge sits directly on this when it opens. One advantage of the arrangement is that the centre of gravity changes position with respect to the point of support - the counterbalance can be adjusted to make sure that when closed, the bridge tends to stay open, and when fully open, it tends to stay that way. The photo also illustrates one of the things I like most about bridges of this vintage - you can't escape the visual evidence of its making and assembly. Modern bridge technology tends to erase rather than emphasise this aspect, and such bridges often appear as if wished-into-place without having experienced any birth pains. 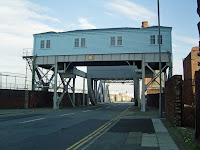 The bridge's machine room spans the roadway, and is something of a blot on the landscape, although not without character. I've included a couple of links at the end to websites with photos of the interior.

The bridge isn't unique, even locally, as there's a very similar span, Egerton Bridge, on the other side of the Mersey at Birkenhead, although I didn't get to visit it on this trip. Examples elsewhere in the UK include those at Barrow-in-Furness, Inchinnan, Keadby and Poole. 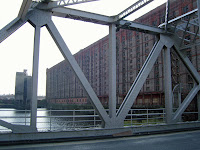 The bridge sits amidst some spectacular disused dockside structures, most notably the absolutely enormous Stanley Dock Tobacco Warehouse building visible in the final picture. There is still a lot of industry nearby, but much of the area is derelict. It's clearly ripe for some kind of Docklands-style redevelopment, but presumably the money simply isn't there.

We are now sat in the Titanic Hotel enjoying the machine room and bridge with a rum cocktail. Your info about the bridge was very informative. The Tobacco Warehouse is now being regenerated into apartments and restraunts.

Hi,
I am hoping to make a book based on the Bascule bridge on the Dock Road in Liverpool. You are clearly an expert and wondered
if you would be prepared to talk to me about the bridge.
Best wishes

Hi Sue, I'm not that much of an expert but feel free to email me at happypontist (at) gmail.com.