Okay, before embarking on a set of reports from a tour of Merseyside, I ought to point out straight away that I'm using the term in its broadest sense, a sort of Greater Merseyside which stretches from Southport in the north, along to Warrington at its easternmost extremity. I know locals get touchy about these designations, but really, it's just an excuse to go visit some interesting bridges and lump them all together here, okay? 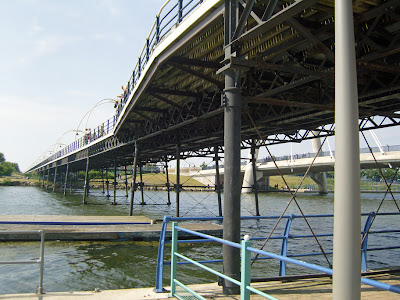 I think Southport Pier is the first pier that I've featured here. Is a pier a bridge? A pier is clearly bridge-like in its structural form if not in satisfying the usual definition of "spanning an obstacle". Southport Pier, however, makes the decision easy, as not only does it jut out into the sea, but part of it also spans an artificial lake. So it's definitely a bridge. 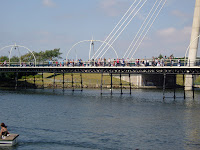 It was designed by Sir James Brunlees, and opened in 1860. At 1108m long, it's the second longest pier in Britain, although a large part of its length is over land. It was even longer in the past, having been extended first in 1864, and then again in 1868. From the point of view of engineering history, its use of jetted piles was pioneering, but I'm afraid I just can't get that bothered about piles. 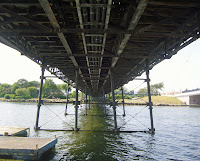 It was proposed to be demolished in 1990, but saved and Listed (Grade II) following a vigorous campaign. I find it hard to fathom why a seaside resort like Southport would want to demolish one of its main attractions, and I think they were perhaps swayed by unrealistic estimates of the cost of maintenance (a figure of £250,000 for repainting every 5 years was quoted).

One of the methods used to help save the pier was by a campaign to sponsor the planks in the deck, the legacy of which is clearly visible via individually named plates embedded in each plank. 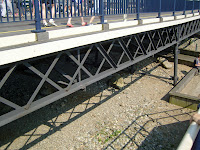 The pier is described as having been refurbished, with the work completed in 2002, but it's clear that large parts of it were completely rebuilt. Looking close up at the main lattice beams, it's apparent they are welded, which clearly isn't part of any original construction. The current aerial image shown at Bing (linked below) also makes clear how extensive the rebuilding was. I guess the cast iron columns and wrought iron tie bar bracing may be original, and for me these are the main attraction of the pier - their delicacy is what makes it an attractive structure, as the modern decking and parapets, and the awful arched lighting supports, are certainly not very appealing.

The pier also carries a unique battery-powered tramway, added in 2005. The links below provide far more information on the pier's history than it would be sensible to recount here.