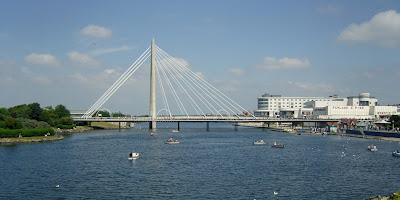 Marine Way Bridge lies right next to Southport Pier, the subject of my last post. The contrast is remarkable. It's perhaps unusual to find a landmark bridge of this size located quite so centrally in a predominantly low-lying urban area. 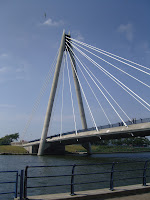 Opened in 2004, Marine Way Bridge carries a local road across an artificial lake, which dates back to 1887. As well as improving highway links, it sought to provide a "catalyst for future investment and regeneration" in what is a somewhat run-down seaside resort. A previous road bridge had been demolished 15 years earlier, and the new bridge restored a key connection between the seafront and the main part of the town.

It's an asymmetric cable-stayed bridge, with the deck supported from an A-frame pylon sitting to one side of the lake channel. It has a main span of 80m, and is 150m long and 18.5m wide. The tower is 56m tall. Both the deck and the pylon are in reinforced concrete.

The bridge was designed by Babtie (now part of Jacobs) with Nicol Russell Studios, and built by Balfour Beatty. It shares a number of similarities to Nicol Russell's previous Leven Crossing bridge at Glenrothes. The design was reportedly the winner of a competition, although I've not found any details on that. The bridge won the ICE's North West Merit Award in 2005.

Seen in elevation, the tower gives the impression it is taller than it needs to be, with the forespan cables steeper than is normal in a cable-stay bridge. A 40m tall tower would be sufficient to get the average cable angle at 45°, which is more conventional. It's not clear whether the height was chosen to reinforce the structure's landmark status, or to reduce the horizontal forces in the deck, and hence on the foundations.
I never really like A-frame pylons, visually. I can't quite figure out what it is about them that I dislike. At Marine Way, an effort has been made to shape the head of the tower, but the legs themselves are still a bit too bland.

The underside of the deck is more successful, taking the form of a concrete ladder beam with two large edge beams and a series of crossbeam ribs. It's more attractive than the underside of many bridges, but from an engineering perspective, the crossbeams seem unnecessarily deep, and the whole thing just too heavy - a steel structure would have considerably reduced the cost of the foundations. 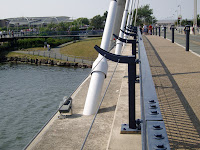 From above, the decision to anchor the cables directly into the edge beams, rather than through small cantilever stubs, seems a little unfortunate. It creates a level platform likely to attract people to hop over the main parapet, and hence needs protecting with awkward cables, as shown.
On the whole, it's certainly not an unattractive cable-stay bridge, but it does strike me as a little out of place, especially set against the other bridges which span this artificial lake (I covered one last time, and the other will be my next post). There seems no pressing reason to have to span the lake without intermediate piers, and an attractive bridge could have been designed which was far less expensive. Whether the bridge fulfilled its aim to act as a catalyst for regeneration, although looking at the surroundings, I doubt there is much that a more modest bridge wouldn't also have facilitated. 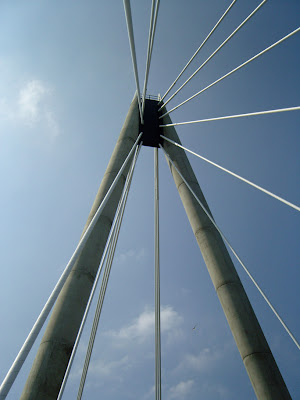