I had been waiting for a chance to visit this bridge for several months, and was glad to finally see it even if the weather was rather dismal. It's easily a favourite amongst the many bridges I've featured here on this blog. 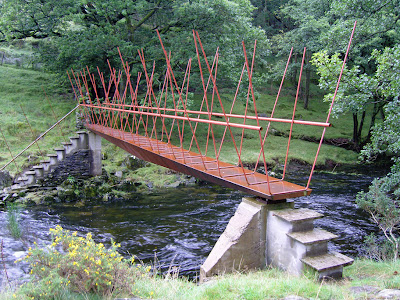 Fisherman's Bridge is remarkable in many ways. It's not a large structure, spanning only 15m, and a mere 0.9m wide, but it's still quite staggering that it was built for the tiny budget of only £18,000. 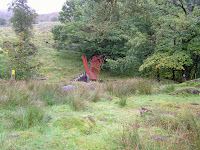 It sits on private land in the Duddon Valley, in the Lake District, providing access for an occasional angler across the River Duddon. It's almost impossible to spot from the public highway.

Structurally, it is almost absurdly simple, a simply-supported weathering steel box girder, triangular in elevation and in cross-section at mid-span. I think it's fair to say that it's design hasn't been limited by the standard 5kN per square metre load normally used in the UK.

The structural engineer was Rob Nilsson of Price & Myers, while the architect was Ralph Parker of H-o-n-e-y. 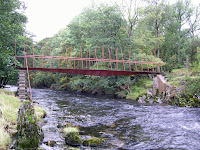 Similarly, the balustrades, intermittent steel rods carrying a tubular handrail, comply with none of the usual requirements, being both easy to fall through, and easy to wobble. That's a good thing, I think.

The rods alternate either side of the handrail to provide some stiffness, but also give a first impression that the bridge has been assembled in a haphazard, jumbled manner.

The steps at either end consist of slate slabs set in concrete, and attempt to raise the bridge clear of the river's flood level. However, the video below, made in November 2009, makes clear that it is not quite high enough!

That's pretty impressive, especially when you see how the bridge is attached to its supports, with simple, slender vertical plates. 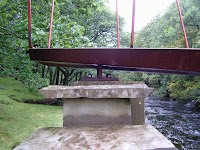 There are some elements of the bridge which appear unfinished, chiefly the way the parapets are painted rather than in exposed weathering steel like the rest of the structure. It's like a piece of rusty old farm machinery which has been dragged to the bottom of the field and dragged across to span the river.

When I first saw a picture of the bridge, I was disappointed by the triangular rather than curved profile, but up close, quibbles dissolve. It's an entirely singular structure, although I am reminded a little of a similarly rusty, non-standard private footbridge in the US. 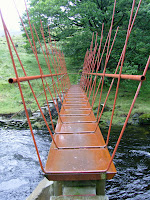 You can click on any photo for a larger version, and if you're perceptive, you may notice that the parapet rods are all of different lengths. This is visually attractive, but offers an added surprise - the bridge plays music. Striking the rods with a stick plays a specially composed tune, made especially effective because the box girder acts as a resonant cavity.

It's a crying shame that the bridge has received so little attention (although it was shortlisted for a RIBA 350 Award in 2010). I think it's one of the most interesting footbridges to be built in the UK in the last few years, a delightful little haiku in Cor-Ten. 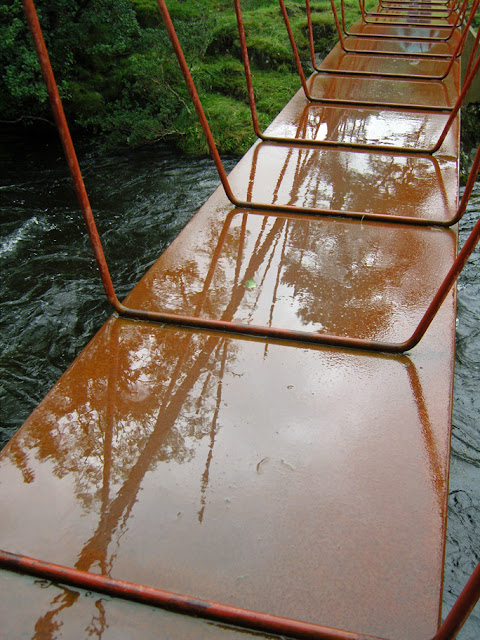 Sweet little bridge. Unpretentious but well considered and charming. Nice to see in a world overly troubled by standarda and codes and icons. Thanks for publishing this.

HP,
Indeed a lovely structure; it's modern yet should fit the site for a long time to come. The musical aspect in your commentary reminded me of this:
http://www.halfbakery.com/idea/Musical_20Bridge_20I_2c_20II_2c_20III
Thanks again,
David