In March, I discussed proposals to replace a railway level crossing in Sleaford, Lincolnshire, with a new footbridge. At the time, four alternative designs (none of them much good), were being presented to the public to obtain feedback. 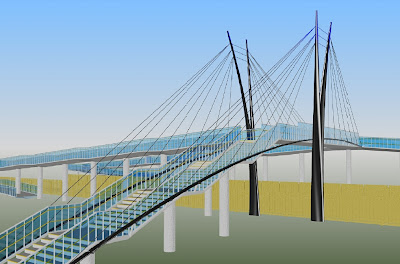 I noted at the time that all four options were pretty horrible, but that the cable-stayed design, pictured here was the best of the bad bunch.

The findings of the consultation have now been declared, and even the public prefer this option, giving it a not-especially resounding 34% of their votes. They still haven't been told what any of the options will cost, however, making any kind of consultation at this stage largely futile.

Of perhaps more interest, is that despite a very positive report on the consultation, the overwhelming majority of the feedback received was simply that the public don't want a footbridge at all, indeed they would far prefer to keep the level crossing. Many of the comments are also opposed to the length of ramps proposed, which seem to be partly due to a decision to provide a 5.8m headroom over the railway, a height which may be the current standard but is widely ignored elsewhere.
Posted by The Happy Pontist at 9:31 PM