Here are some photos taken on a visit to Birmingham, of a modern footbridge across a canal. It's a rather unattractive bridge, but there are several features worthy of comment. 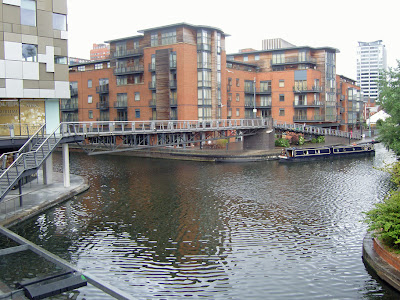 I haven't been able to confirm the identity of the designer or the builder, although there is a very similar design by specialist footbridge manufacturer CTS Ltd not far away. 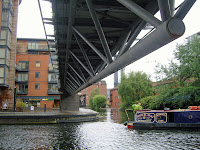 I don't know that there's a word for this type of bridge. Most truss bridges are "through" or "half-through" structures, where the bridge deck passes between the supporting truss girders. This maximises one of the advantages of the truss form, which is its ability to accommodate a very shallow depth of structure between the footway or roadway surface and the underside of the bridge. This is often required to maintain headroom below while minimising the length of approach ramps.
This bridge, which sits just to the east of the shopping, restaurant and office development known as The Mailbox, has a three-dimensional truss supporting the deck from below. It is triangular in cross-section, with the web members arranged in Warren truss form. The deck is also fully braced, ensuring that overall the truss has sufficient torsional stiffness. As the deck is supported from its two upper chords, it is also secure against overbalancing. 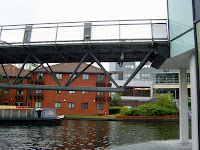 However, you can see on the photo on the left that the ends of the truss terminate in a very awkward way. It's unclear quite how the truss is supported, with the bearings hidden behind a covering plate. Also, because the bottom chord is a constant section and the truss a constant depth, the entire bridge looks visually "stiff", ending abruptly where you might expect the bottom chord to curve upwards.
I believe some of this is just poor design, but some of it is due to the difficult construction history - the bridge was built before the adjacent building was started. It's far from clear how well coordinated the different construction operations and designs will have been. Whatever, the reason, the ends of the bridge look very clumsy. 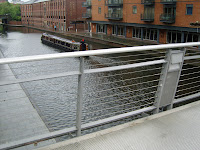 The bridge parapets are in a fairly standard contemporary style, with horizontal wire infill, although the boxes for the lighting units are perhaps overly intrusive.
The decking is a cheese-grater type material, visibly perforated from below but appearing very solid from above. It will be free-draining into the canal, and may therefore be partly responsible for the poor condition of some of the steelwork below. 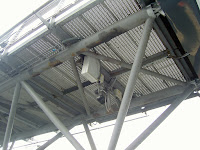 Underneath, the structure looks particularly unattractive, with what I presume are lighting cables and power supply units dangling from the industrial walkway material and the patchy steel frame.
There are two or three other interesting footbridges over the canals in central Birmingham, which I hope to visit and then cover here when I get a chance.
Further information:
Posted by The Happy Pontist at 10:14 PM