It's stretching it a bit to call these "Manchester" bridges, but it's as convenient a tag as any. These are essentially rural bridges, in and around the town of Marple, near Stockport (which is part of Greater Manchester).


All three bridges, and several others, can be readily reached on a morning or afternoon's walk, and one of the links below leads to suitable walking directions. All three are Grade II Listed Buildings, and there are plenty of other Listed bridges in the vicinity, including the Marple Aqueduct. 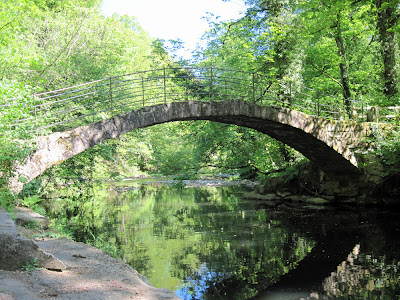 Marple's "Roman Bridge" is a pretty packhorse-style masonry arch spanning the River Goyt, near the so-called Roman Lakes. Neither the Bridge nor the Lakes date back to Roman times, it was merely a name attached to them when they became briefly popular with leisurely Victorians. The Roman Bridge itself is believed to date from the mid 18th-century, and was at one time called Windy Bottom Bridge 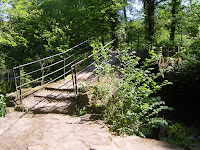 The engineering perspective is hardly relevant, but it's a segmental arch with a single arch ring, with the spandrels rising to a level a little below the arch crown. It currently has lightweight iron railings, although probably had masonry parapets at one stage. It spans 13.7m and is 1.75m wide. 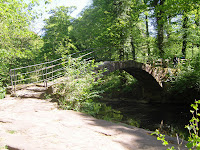 It's a sweet little structure in a picturesque spot. As a bridge designer, it begs the question of how modern designers could emulate its charm. Simplicity isn't enough - the attraction of a bridge like this lies in its shape, its transparency, and its texture, not all of which are easy to achieve in modern materials.

Another attractive bridge in Marple is Sutton's Lane Bridge No. 1, better known as the Roving Bridge, although it is only one of several such bridges. It spans the Macclesfield Canal at its junction with the Peak Forest Canal - both canals have further roving bridges, including a brick example nearby on the latter. 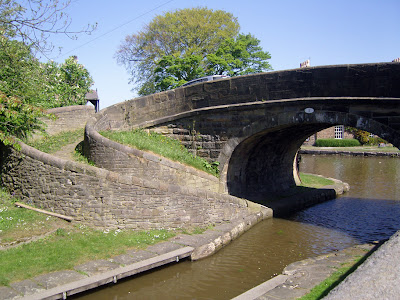 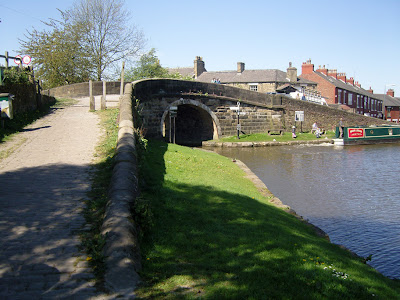 It's engineer was William Crosley, and it was built around 1831. The arch is an attractive horseshoe shape. 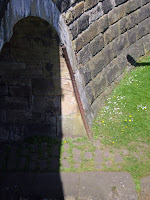 The edges of the arch barrel are protected with metal bars at lower level, as can be seen on the photograph to the right. These are to prevent damage to the brickwork from ropes running between horses on the towpath and barges on the canal. As can be seen in the photograph (click any image for a full-size version), there has been sufficient contact over time that even the metal bar has become grooved through repeated rubbing. 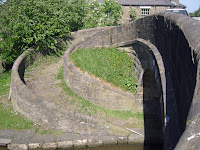 The bridge gets its name as a "roving bridge" from the spiral layout of the approach ramp on one side. This allows a horse towing a barge on one side of the towpath to cross the canal and switch to the opposite towpath without ever having to unhitch the tow-rope. It makes for a very quaint, charming bridge. 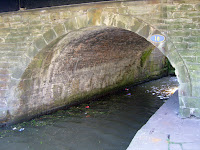 Immediately north along the Peak Forest Canal, there is a flight of locks each with a small brick footbridge, ending at a span called Posset Bridge No. 18 (or perhaps Possett Bridge, depending on the source). This was designed under the auspices of Benjamin Outram and Thomas Brown, and carries a minor highway over the canal. 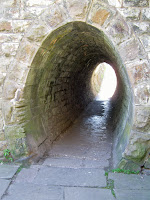 It was reportedly built on behalf of the local industrialist Samuel Oldknow, and named the Posset Bridge because he arranged for the workmen to be supplied ale posset from a nearby inn.


It has been widened on its north side with a metal beam footbridge, which makes it less than attractive viewed as a whole. However, on its west side, there is a short horse tunnel, in a narrow horseshoe or egg shape, used originally to allow horses to pass below the highway while boats negotiated the adjacent lock. As at the Roving Bridge, there are clear grooves on the edges of the tunnel cause by rubbing from tow-ropes. A smaller boatman's passage also exists, providing access from the lock gates down to the lower towpath.