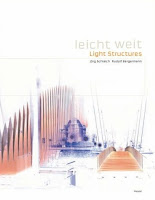 ] is a mammoth coffee-table slab documenting the ever-fertile genius of one of Germany's best known design firms. It came out a few years ago now, an offshoot of a series of exhibitions of Schlaich Bergermann's work held in 2003 to 2005, but I re-read it recently and it more than deserves a mention here.

Schlaich and Bergermann began working together in 1968 in the office of Leonhardt und Andrä, collaborating on a number of television towers, and lightweight structures such as the Munich Olympic stadium roof. In 1980, they set up their own firm, Schlaich Bergermann und Partner. Schlaich had followed his mentor Fritz Leonhardt in becoming a professor at Stuttgart University, and was as prodigious as Leonhardt in his ability to bridge consultancy and academia, contributing to a staggering range of innovative designs.

Presented throughout in dual German and English, the book marries a series of essays with a lengthy survey of SBP's work written by Annette Bögle. The chapter headings give a good idea of quite why SBP are so important: concrete towers; cable net and steel lattice towers; concrete shells; cable nets; grid shells; textile membranes; air-inflated roofs; cable-suspended roofs; highway bridges; railway bridges; footbridges; solar power plants; and more. If they ever deign to descend into the world of mundane civil engineering, little trace of it is to be found in this book.

The essays are generally illuminating, and include contributions from luminaries such as Marc Mimram and David Billington. An interview with Schlaich offers amusement when he is quoted as describing the "wild ones" who "outdo each other with puffed up and squashed blobs, often just satires and caricatures of misinterpreted 'role models' - with no connection between form, function and flow of forces". This is juxtaposed with a picture of a Frank Gehry building design, surely the antithesis of this statement - although, of course, Gehry has often collaborated with SBP.

Schlaich's own essay on lightweight construction identifies it as important for its combination of social, ecological and economic benefits, while clearly noting that it has limits including the paradox that the lightest weight permanent form often requires the heaviest construction methods to build. However, Schlaich sees this as an advantage, particularly where increased labour costs are recognised as beneficial due to the increased employment generated.

Indeed, the essay exemplifies his engineering ethic quite clearly: socially and environmentally aware, an attitude seen both in their early Hooghly Bridge design, with its multitudes of rivets well-adapted to local working requirements, as well as their recent keen interest in solar power structures, and their potential to alleviate energy-poverty at low cost.

"Light Structures" is copiously illustrated with both photographs and diagrams, and the structures included are generally well explained. Most of their best bridges are included although there are some curious omissions such as the Löwentor cable-net footbridge and the Obere Argen Valley Bridge.

Both those were, however, well-covered in Alan Holgate's "The Art of Structural Engineering: The Work of Jörg Schlaich and his Team" (1997), another bulky coffee-table monograph which could be considered to be either competing or complementary. Hopefully I'll cover that one on another occasion.

"Leicht Weit / Light Structures" is an essential book for anyone interested in innovative structural engineering. It's well written and well illustrated, and an excellent survey of some of the most innovative work of the late twentieth century, including in the bridge engineering field.
Posted by The Happy Pontist at 11:17 PM