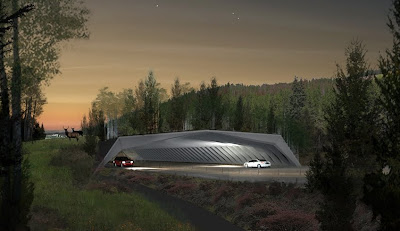 The winner of this contest to design a prototype wildlife bridge in Colorado has been announced: HNTB with Michael Van Valkenburgh & Associates.

When I previously covered the competition finalists, I noted that this design was my favourite, because the structural form is both easy to erect and readily adaptable to different geometries. The bridge has the elevation of a portal frame, but functions as a three-pinned arch, with the two halves of the portal propped against each other at the crown.

Each precast concrete element is in the form of a hyperbolic paraboloid (hypar) shell, which provides high stiffness while being of low weight, hence easy to erect without requiring unduly heavy craneage. The size can be readily amended and multiple units stacked side-by-side to create differently sized wildlife crossings.

"combined brilliantly an overarching focus on wildlife habitat, behavior, and viability with a practical intelligence regarding the making of such a work of infrastructure. The scheme marries well a simple elegance with a brute force. It effectively recasts ordinary materials and methods of construction into a potentially transcendent work of design."

Clearly, they were looking for something practical and modest rather than an architectural statement in its own right.

I wonder whether the winning design has wider applications than just for use in building wildlife bridges. For example, could it substitute for the precast con-arch system sometimes used to cheaply span watercourses, but which lacks the ideal profile for spanning roads and railways? The challenge is in getting the formwork adaptable for precasting a wide range of geometries, and I'm not entirely convinced by the simple diagrams provided above (click on any image for a larger version).

Posted by The Happy Pontist at 8:23 PM