Back in February I featured the various entries to the Peabody Trust Habitable Bridge competition, held in 1995 and involving design of a crossing of the Thames between St Pauls Cathedral and Bankside in London. The idea of "Living Bridges" was very much in the air at the time, with an exhibition at the Centre Pompidou.

Indeed, it's an idea that (despite its many problems) still hasn't gone away, with schemes in Hamburg (pictured, right) and Duisburg, for example, not to mention Zaha Hadid's bridge pavilion in Zaragoza.

The problems of "living bridges" are well illustrated in Amsterdam's Entrepotbrug, built in 1993, a monolithic blot on the landscape that would be far better hidden amongst other buildings than allowed to dominate river views.

In 1996, the Royal Academy held its own exhibition on the subject, documented in the excellent book Living Bridges. In conjunction with the exhibition, they held an invited competition to design a habitable bridge at a different point on the Thames, running between Temple Gardens on the north bank and the LWT building on the south bank.

This competition was essentially speculative: there was no funding to actually build such a bridge. It was an attempt to promote the concept itself, in the hope that publicity might get developers to take forward a scheme. The competition was sponsored by Thames Water. Seven designers were invited to submit ideas.

People attending the exhibition were asked to vote for their favourite designs: I recall voting for the Daniel Libeskind proposal, with its interlinking network of walkways likely to make for a more interesting experience than some of the others. The Zaha Hadid design was somewhat unfathomable in its perspex blockiness, but seemed to offer a compromise between keeping the habitation on the banks (to preserve views) and siting it on the bridge (to provide the over-water experience).

Antoine Grumbach's design sought to preserve views by keeping most of the building off the bridge entirely, essentially just riverside apartments joined to a nice pier. Like Ian Ritchie's minimalist slab, it was a sober effort. By contrast, Branson Coates' phallic alien mothership was amusing but impossible to imagine being built at this site.

Much the same was true of Future Systems' dayglo pod, or Krier Kohl's dark tribute to Crystal-Palace era London. What were they thinking?

Now in 2009, London Mayor Boris Johnson has revived the Grumbach proposal, with an estimated cost of £80m attached. This isn't the first time it has been resurrected - it had the dust briefly shaken off in 2000 as well. It remains extremely unlikely ever to be built.

Essentially, the problem of the habitable bridge is still the impossibility of resolving the visual impact on the riverscape against the need for sufficient accommodation to achieve economic viability. In 2000, English Heritage were scathing about the Grumbach design's impact on river views, describing it as "walling off" the river.

With that in mind, the feasible options are reduced. One is to minimise the accommodation and its height, which limits viability to narrow rivers or locations with cheap land (in which case, why build on the river at all?) The other is to find locations where the views simply don't matter, which means leaving the river behind and building above streets and railways - and who would want to live there?

As a concept, the habitable bridge isn't quite dead, but it's difficult to see many being built in future.

(For those interested, there's more on the "living bridge" subject at A Daily Dose of Architecture, covering designs by Steven Holl and Dan Hisel). 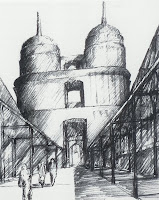 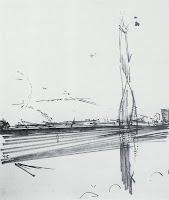 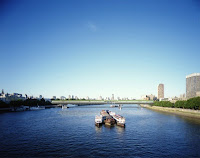 Posted by The Happy Pontist at 9:37 PM

All of these dire proposals miss the point that rivers are not for building on, they are for building up to. Even the Ponte Vecchio is an ugly imposition on the Arno waterfont. There is no city in the world where real estate values are so high that they merit trashing the special transition between land and water.