In January 2004, at the start of Liverpool's Year of Faith, a competition was launched to design a "glass bridge".

The site was the city's Anglican Cathedral, Sir Giles Gilbert Scott's great edifice towering above the edge of St James' Cemetery, a former quarry which had been converted to a burial ground in 1829, and then into a public garden in 1972. In its present form, this artificial canyon acts as a 50-foot deep barrier, preventing access to the Cathedral's south face from nearby Hope Street. 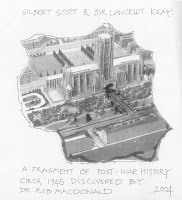 Scott had himself proposed a bridge across the sunken quarry (pictured, right), but this traditionally styled arch viaduct was never started. Construction of the Cathedral had begun in 1904, but it was only formally declared complete in 1978, and the bridge was dropped from the plans as work progressed. 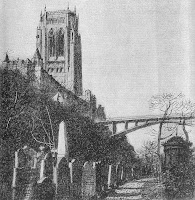 Proposals were again made for a bridge by students at Liverpool University in 1948, and published in the Architectural Review. Their scheme was for a far more modern reinforced concrete arch (pictured, left), but this was somewhat speculative and again, never realised.
The 2004 competition was organised by Dr Robert MacDonald, an architectural lecturer at Liverpool John Moores University. This again was somewhat speculative - there was no funding, and I gather that the Cathedral's support for the proposal was somewhat ambiguous. The hope was that a good idea might attract sufficient funding to become reality, particularly with Liverpool's status as European City of Culture on the horizon in 2008.
The open competition was announced in Building Design magazine, and 23 entries were received. A shortlist was drawn up, and the winner eventually announced in June 2005 as Buro Happold with Hakes Associates. However, the project never did secure funding, and the bridge remains unbuilt.
There are many bridge design competitions which stand on similarly shaky foundations - in recent years, RIBA's River Douglas contest comes to mind as another case where considerable creativity was devoted to a scheme which had no committed funding behind it. Like the RIBA contest, the Liverpool competition attracted a wide variety of entrants, from the seasoned professionals to students, many from people with little understanding of basic structural engineering. Nonetheless, the "glass theme" and the challenging site led to several very interesting designs.
As ever, links are only provided to a competitor if they have a website with more information. Click on the thumbnail images for full-size versions. All images have been provided courtesy of Rob MacDonald but are the copyright of the original competitors. Contestants are invited to get in touch if they want an image removed or can identify the one or two images where I couldn't identify the entrant.
Winner
Buro Happold / Hakes Associates

When you see the quality of some of the designs submitted for this competition, and so many others, it is arguably a good thing the competition process is inefficient at actually realising built bridges. I would rather fewer good designs are built than more bad ones. Some of these designs are truly shocking and should never, ever be inflicted on the public.

The Liverpool competition is a slightly unusual case in that it was somewhat "informal" - there wasn't a huge draft of requirements given to entrants, nor were there any prequalification hurdles to jump through to enter. The result included several entrants by people who were clearly not professionals, and several who clearly didn't understand what it takes to make a bridge stand up.

Anecdotal feedback from the judges of RIBA's River Douglas competition (similarly low entrance hurdle) is that it also generated plenty of entries which were of poor quality. Competitions like these are as much about raising publicity as anything else.

But there are some gems in there, like the glass stressed ribbons proposed for Liverpool by both Whitbybird and Strasky/Bednarski. And there are plenty of competitions elsewhere which have led to successful bridges being built. The key to me, is to promote the involvement of serious, knowledgeable designers, without going down the route of just restricting the shortlist to the usual suspects.

It appears one of the main design problems at this location is the delicate archeological sites in either bank. . The banks are both riddled with catacombs and burial chambers and tunnels. The winning entry appears to be a tied structure with little horizontal loading into the bank. Also designs which had a mast or support in the valley of the park would have disturbed many historic graves

The design was recently included as part of the Walk of Faith funding and discussions are still on going with funding routes - just last week in fact with City Council members. Considering it took close to 100 years to complete the main cathedral - waiting a few years is not such a bad thing.

The winning bridge has an inclined support which from the images would seem likely to result in a net horizontal force on the deck to be resisted at one or more of the end supports.

It's also a somewhat untested design which looks simpler in elevation than it really is - it looks like a suspension span and arch span, but because the main structural member spirals around and below the bridge, it will be very difficult to make it structurally stable. If the scheme does go ahead, there's a lot of engineering feasibility work still required.