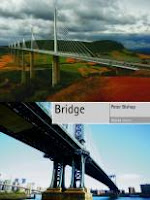 "Bridge" (ISBN 978 1 86189 346 8, Reaktion Books, 2008) is one of several books in the Objekt series which takes a cultural studies perspective on key products of modern life. The author, Peter Bishop, graduated in 1967 and worked in civil engineering for five years, but is now an associate professor in communication and cultural studies. As such, he offers a perspective unlikely to be familiar to most bridge enthusiasts or designers. (For more on Bishop, there's a short interview at Who Walk in Brooklyn).

This book is not structured in the way that many books about bridges are – by technology, by history, or by geography. Instead it offers more of a meander through the manner in which bridges are represented, encountered or influential upon society. Although occasional attention is given to the designers of bridges, they are largely absent from Bishop’s perspective, which comes instead from the point of view of those who use or are affected by bridges.

Some indication of how much the book meanders might be gained from knowing that the 55-page introduction is longer than any of the four chapters of the book. Bishop wants to consider the idea of the bridge from as many angles as possible, so in the introduction he offers sections on “the bridge as stage and target”, “psycho-philosophical bridges”, “invisible bridges”, and many other sometimes oblique ways in which the topic could be approached. Central to the book is the concept of bridges as stories rather than objects – as Bishop puts it, “telling the bridge”.

“lightness, fragility perhaps – closely parallels the essence of free and open society … [the Menai suspension bridge was] the first major work of structural art visually to symbolize, in its thinness, the lightness of the new engineering and the demands of the new politics”.

These multiple perspectives are aimed at the non-specialist reader, but are a particularly valuable antidote to the narratives which dominate writing on bridge design and bridge history. Most non-technical writing on bridge design concentrates on visual aesthetics, often promoting recipes for supposedly objective ideals about the “beauty” of bridges, flogging the dead horse of function begetting form, or poeticising the shaping of a bridge’s structural elements. A surprisingly small proportion of bridge design literature places the end-user or neighbouring community as central.

In the historical field, writing about bridges is frequently dominated by the history of technology – the story of bridge design told as a sequence of inventions, or by the heroic narrative – the tales of the valiant Great Men who designed bridges (almost never the people who built them, maintained them, or had their homes destroyed to make way for them).

Having set himself against these one-dimensional methodologies, Bishop’s polymorphous, diversely-voiced book generally succeeds in offering something fresh, stories about bridges which haven’t been heard too many times before.

The book’s chapters draw on the introductions wide-ranging ideas but distil these into four basic themes: “technologies of extension”, “technologies of assemblage”, “technologies of connection”, and “spanning technologies”. The last of these falls closest to conventional tales of bridge engineering, identifying key structures from the engineering chronology and discussing the tension between innovation and failure which has driven the quest for ever-longer spans. However, even this section moves beyond this to consider the impact of super-spans such as the proposed Straits of Messina and Hong Kong – Zhuhai – Macau crossings, noting their ability to shift the centres of gravity of existing cities and to enable the creation of new mega-conurbations (the Macau project potentially creating a “city” of nearly 50 million people).

A key focus in earlier chapters is on the bridge as a tool in economic and political expansion, as in the controversial Qinghai-Tibet railway project, incorporating over 600 bridges and helping to cement Chinese political and cultural dominance of Tibet. While opposed by many in the West, this project has clear echoes of the westward expansion of American railroads in the mid-nineteenth century – what is seen by pro-Tibetan westerners as authoritarian in China was seen by most as pioneering and adventurous in America, but the urge to cement control of territory and open up new economic opportunities may be the same in both cases.

A similar example is given in the Hindmarsh Island bridge in Australia, promoted by developers as the vital connection to enable new marina development, but opposed by the aboriginal Ngarrindjeri community due to its purported impact on a sacred fertility site. It was opened in 2001 after a long and bitter legal battle. Like the Tibetan railway, it’s a fascinating account of what is often disguised by bland terms like “stakeholder impact”, but bridges aren’t really central to these accounts, which would be little different whether the projects incorporated bridges or did not.

While this is a weakness, other stories in the book do maintain the focus on the issues specific to bridging. For example, the Skye Bridge is offered as a case where the power of a bridge to connect is not always welcomed by people for whom a sense of disconnection is part of their identity. Another interesting illustration is given in the use of bridges in Israel to facilitate social apartheid by carrying strips of Israeli territory above Palestinian land, a poignant reminder that the ability of a bridge to disrupt shared space and eliminate coexistence (normally, of two types of traffic such as road users and boat users) is not always a happy act.

In general, I thought this was an excellent book, consistently thought-provoking and for the most part free of the impenetrable obfuscation and obsessive quoting of post-structuralist masters (Barthes, Baudrillard et al) that mars much “cultural studies” writing. As a bridge designer, I found it a welcome reminder of the need to think beyond the narrow horizons inherent in a specialist’s interests. It emphasised to me that much of what goes unchallenged by bridge engineers is just the result of our immersion in one of many possible stories about bridges and their creation. This book offers some of those diverse narratives, while making clear that many more remain to be told.
Posted by The Happy Pontist at 8:17 PM

This book is particularly welcome in providing an alternative viewpoint to most books on bridge design which, as you say, focus on technological advances, 'heroic' characters and other narrow engineering themes. Bridges frequently are significant interventions in the landscape (whether urban, coastal, rural etc) and are almost always an imposition on the place and its people. As such they require much more careful consideration than is normally given by designers working to budgets and programme, who are trained to address these specific constraints in an efficient way, rather than to consider issues of broader cultural and physical context.

Designers, however aware of wider issues they may be in "normal life", often put the blinkers on when working to a client's brief, assuming that somebody else is dealing with the wider social and political issues beyond the formal scope of work. Commercially, putting on the blinkers is sometimes essential to maintaining a happy relationship with a client!

Normally I'd be quite critical of the American practice whereby the general public are often given a real role in making bridge design decisions (because it undermines the scope for "visionary" design that a designer can create when given the auteur role). But it does at least have the advantage of forcing the designer into contact with "real people", rather than their representatives who often have more narrow agendas (e.g. how can I spend this regeneration cash as quickly as possible).