Organised by RIBA on behalf of the regeneration company, Sunderland Arc, the competition sought a design for a highway bridge across the River Wear, with the organisers being quite explicit that they were looking for something iconic. The winning design (pictured right), by Techniker and Spence Associates, is currently undergoing further technical development before Sunderland City Council decide whether or not they can afford it.

I've been keen for some time to publish the other entries, the five designs that weren't chosen. H0w is the winner to be properly judged if not against its peers? Sadly, Sunderland have refused to release images of the other entries, and my enquiries with the designers have, with the two exceptions shown below, drawn a blank.

Three losing entries came from Halcrow, Flint and Neill, and Dissing + Weitling; Hyder and Yee Associates; and Jacobs Babtie, Leonhardt Andrae und Partner, and Marks Barfield. I would love to show you these, so if any of the designers would like to send through their images, please email happypontist at googlemail dot com.

The other two losing entries are shown below courtesy of Schlaich Bergermann, and Wilkinson Eyre. How do they compare against the winner?

In many ways, all the designs share a desire to adopt an unnecessary and inefficient structural form purely to shout "look at me". That's not unreasonable - I think it's a large part of what Sunderland were looking for.

The Gifford / Wilkinson Eyre design is far more economic than the winning entry, with a cable layout that doesn't impose too many unnecessary forces on the support tower, particularly in the way the cables are arranged in plane with the axis of the V-shaped pylon arms (minimising bending moments).

That V-shaped pylon itself, of course, runs the risk of being seen in Sunderland as a two-fingered salute to local rivals such as Newcastle - see, our bridge is bigger, better. I can't help thinking the basic geometric idea (the X-shaped pylon and cable arrangement) doesn't quite make sense here, but could be developed into something interesting on a different site.

The images of the Schlaich Bergermann entry are a real curiosity, as much for the insight into their creative process as for the unlikely solution itself, a combination asymmetric cable-stayed suspension bridge, from which giant glass scales are suspended. Gehry doesn't strike me as an architect with much sympathy for the normal imperatives of bridge design - his work is about shape and surface rather than structure, and his non-linear, protean forms are at odds with the linear, refined forms normally suited to bridges. Jörg Schlaich, on the other hand, is a giant of engineering notable for pushing the boundaries of structural innovation without normally departing from the primacy of his structural ideas.

The Gehry / Schlaich design for River Wear seems to have its origins in Schlaich's 1989 Neckarstrasse footbridge, albeit at a larger scale and with the reverse suspension cable (the one that curves out of the tower like a letter D) much improved in shape. The only similar design I can recall seeing is Robert Benaim and Powell Williams's design for the Royal Victoria Dock bridge. Like that bridge, my first thought is about the difficulty of cable replacement once in operation.

Gehry's glass scales simply aren't my cup of tea, they seem like an afterthought, and I can easily imagine the judging panel worrying about both how they'd be restrained, maintained, and protected against damage. I do, however, admire the way that Gehry brought something so unpredictable to the design.

So, if you had to choose between these three designs, which would you choose, sat in Sunderland's shoes?

As with all these posts, click on an image for a full-size version. 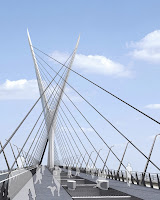 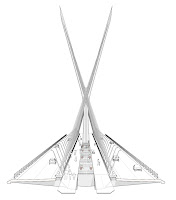 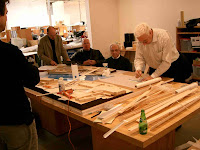 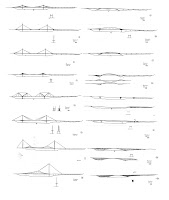 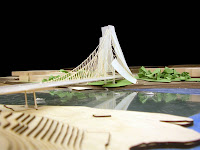