Iconic vs laconic - you decide!

Sunderland City Council have started their public consultation on the River Wear Bridge, which the Happy Pontist has covered sceptically before. There are images on show at various locations, as well as a consultation leaflet that can be downloaded. There are only two competing images being made available, with an earlier thought that they might offer an intermediate option appearing now to have bitten the dust.
The conventional option, which comes within a budget already promised to Sunderland by central government, is a five-span girder bridge: 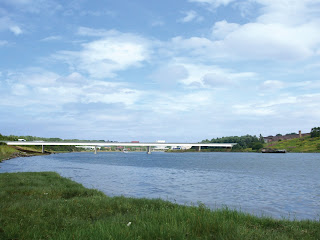 Not even slightly exciting, and relatively risk free, depending on how much work has been done on geotechnical, hydraulic and ecological studies in the river, where there will be a number of foundations. Sunderland describe it as "tried and tested" which is clearly a dig at the alternative, untried, and untested iconic design by Spence and Techniker.
The iconic option is much as seen before, although the higher-resolution image (click on the picture below) seems to show the cable arrangement more clearly. 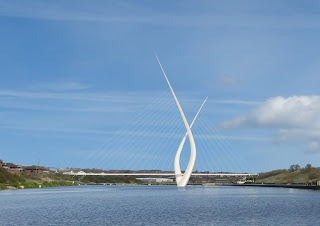 Sunderland allude to the likes of Jimmy Choo and Gucci by describing it as a "designer bridge" and pointedly note that the £30m extra it would cost could pay instead for 6 new schools. That £30m extra is interesting, because it implies they have a cost estimate significantly higher than the bridge's designers have suggested.

They also (wisely) draw attention to the issue of risk, stating that "the risk of construction and future maintenance costs rising is higher for a project that has unique features than for a tried and tested one". This is difficult stuff, because there will be very few members of the public who have any way of judging the real risks of an unbalanced cable-stay bridge like this. These might include dynamic behaviour problems, construction difficulties, huge foundation requirements, impact on birds, all sorts of things.

Before the decision was taken in July 2005 by Sunderland to make this option their competition winner, they recognised that it was "of a striking and unusual form ... believed to be unique". They commissioned an independent review, which concluded that "construction of the bridge is challenging but achievable" and its "dynamic performance ... is extremely complex", with designer Techniker confirming that detailed analysis and testing would be needed to review this issue. The review also concluded that the bridge concept may require amendment both to meet the budget and the possible dynamics issues. All this can be found online at Sunderland's cabinet minutes for 27 July 2005. It's not apparent to what extent the design has been further developed since then to address these points.

The Sunderland Echo is running a poll for the two designs, currently running at 92% in favour of the iconic bridge, and 8% for the low-cost option. This suggests residents are happy to pay the £263 council tax surcharge that their council says would be required. However, the Echo quotes several people disputing the cost, which they believe would be much lower. At the risk of provoking a deluge of comment from bridge-happy Wearsiders, I think the bridge's proponents generally lack the expertise to pronounce on this quite as confidently as they are doing. The bridge design competition world is littered with examples of unusual bridge designs where the real risks were never appreciated at the outset, and which ended in failure.

What still puzzles me is quite why Sunderland have chosen to pursue this public consultation. Public support for anything that allows Mackems to boast at being better than their Geordie neighbours is no surprise. But they have no sensible way of judging competing claims regarding feasibility, cost and risk, other than a natural inclination to trust the underdog (Spence) against the political establishment.

Posted by The Happy Pontist at 1:15 PM

Reading the council documents I was struck by the fact that the cabinet really had little choice in the appointment of the designer since the competition rules did not allow the jury 'recommendation' to be overturned. The only alternative to accepting the recommendation was to turn it down and hence make the competition void. Perhaps this is a standard clause, but it raises the question of accountability and the importance of taking great care in the choice of the jury.

It's a fairly standard clause, and it's there for reasons of public policy: without it, entrants could not be assured that the process of award would be fair. Of course, the River Wear Bridge Competition wasn't Sunderland's first attempt to get this scheme off the ground: they had a previous exercise which only attracted three entrants. The rumour was that most designers avoided it because there was a perception the whole thing was stacked in favour of a California-base starchitect. If they go away from the Spence/Wells design, they will now need a new procurement exercise to again ensure fair competition, but D&B tenders for a "bog-standard" bridge would satisfy this.

You are right that it makes the choice of jury absolutely key. A previous commenter on this site suggested the jury included two "bridge building experts", but has not replied to tell us who these supposed experts actually were. I would be genuinely interested to know, because any jury faced with a clearly innovative design has a difficult choice to make: turn it down because they fear it can't be built; or accept that to do so can hinder innovation and prevent genuinely new ideas emerging.

It seems the future of this bridge will be fought out in the fields of politics, with the real technical issues largely left hidden. Its design engineer, Matthew Wells, has stated that a bridge "of similar size and span and of exactly the same construction and arrangement has been constructed a decade ago without any difficult or on-cost or excessive maintenance regime". Quite which bridge he means is hard to guess, but if anyone knows, I'd be glad to hear.

Meanwhile, design architect Stephen Spence suggests that if his design of the North Shore Footbridge can be built without problems, then his River Wear design must be okay too. I'm told, but can't find an online source to confirm, that his North Shore design ended up costing over three times the original budget; and there is controversy over exactly how much of the design concept was Spence's and how much was by Expedition Engineering. In any event, comparing a relatively conventional arch footbridge to the unique River Wear design is essentially irrelevant.

Sunderland Council's Phil Barrett responds to Spence by noting that ""The design is novel and there is therefore a higher risk that the cost estimate would increase as the detailed design develops." This is odd: it's understandable that the designers will underplay quite how startling a departure from conventional cable-stayed design their proposal is; but here is the council downplaying the same point. "Novel" doesn't really do justice to the audacity of a bridge where the mast has no back-stays and at the same time inclines towards its deck, something only attempted before on a small footbridge, not a highway bridge on this scale.

Notable amongst all the hot air (from all sides) is that the public is being asked to rely entirely on the word of the various protagonists: none of the technical material which might assist an open and transparent evaluation has been made public. This includes the original competition entry; the reports of the technical panel and judging panel; the subsequent independent peer review; or the basis of the council's cost estimates, which have vastly inflated compared to Spence and Techniker's original figures. I've asked Sunderland City Council for copies of some of this, but had no response. It would be nice to hope, however, that before the present public consultation comes to an end, the debate can move beyond ill-informed rhetoric and allow a more rational judgement of the bridge's merits.