The River Wear bridge competition story looks like it will run and run. Sunderland City Council have announced dates and details for their public consultation, which will see Techniker and Spence's competition-winning design presented alongside two less exciting alternatives. The aim is apparently not to pick which bridge to build, but to find out what the public thinks is most important when making the eventual choice: appearance, risk, cost, environmental factors etc.

Judging the public appetite for risk will be interesting: it's unlikely that however much information they are shown, they have any way of really judging the financial risks involved in a dramatic and unconventional bridge design.

The bridge proposals will be exhibited throughout Sunderland from Wednesday 10th September, and also available on a website (not up just yet - I'll link when it appears). I gather the image I featured here before isn't an "official" picture, so here's one of the official images as a taster (click on it for the high-resolution version showing the cable layout more clearly): 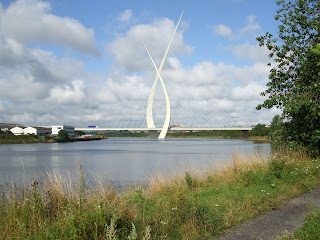 It's not 100% clear from this first image (more should be available next week), but it looks like the two curved masts aren't connected to each other i.e. the bridge consists of two cantilever masts with no tie-backs. If the masts are indeed connected, it's certainly a more stable design than currently appears to be the case.

Matthew Wells of Techniker is reported in this week's New Civil Engineer as saying that "it looks weird but it's a conventional structure with sculptural pylons". It would be interesting to see other examples of this supposedly conventional structural form: I struggled to find any other than Calatrava's Puente de la Mujer, which is a much smaller footbridge in Argentina.

Perhaps he meant that for Techniker it's conventional? But their website doesn't list any completed cable-stayed bridges in their portfolio, with the 12-year old Royal Victoria Dock Footbridge the closest thing. They have certainly proposed a bridge of this type elsewhere, at Bergen, also designed in collaboration with Spence, but I don't believe that was ever built.

Wells also notes that the bridge budget was whittled down (or "value engineered") to £31m three years ago. Working out at roughly £3,000 per square metre of deck, that's double the cost of a fairly simple highway bridge, and nowhere near the ballpark for such an unusual structure as this one.

Stephen Spence, the River Wear bridge's architect should in an ideal world be rejoicing this week. Not only has his "secret" design been finally made public, but the second arch of the North Shore Footbridge at Stockton-on-Tees is also due to be installed any day now. Of course, that's another bridge that (apparently) came in way above its original budget, amidst a very public falling out between Spence and Expedition Engineering. Expedition's Chris Wise was quoted at the time describing Spence's concept design as something that "would not stand up on Planet Earth".

It will be interesting to see whether there is any reaction from fellow engineers now that the River Wear design has appeared in NCE; otherwise the next stop on this trail will come with the public exhibitions next week, and hopefully the chance to find out more about this spectacular, eccentric design.
Posted by The Happy Pontist at 11:19 PM

Spence Associates also made the final three for the River Hull Footbridge competition, with a similarly..er.. challenging design. If you watch the slide show on their website it comes up after a few minutes.

This bridge is a fine example of the 'virtual backstay' concept