Hands off my bridge, it's a work of art

Imagine you own your home, and you've just embarked on a small building project to add a little extension out the back. Perhaps you're after a bigger kitchen, or to add a play room for your kids.

Your extension is completed, and you enjoy it very much. Until, that is, you find in the post one day, a writ from the designer of the original house. She claims that your extension is a mutilation of her original design, and asks the court for damages to restore her reputation. You are, I would guess, flabbergasted. It's your house, after all. Who is she to say you can't alter it as you wish?

Far fetched? Just plain weird? In Britain, it would be impossible, but that isn't the case everywhere.

For the last two years, Santiago Calatrava has been fighting just such a case against the authorities in Bilbao. The case relates to Calatrava's Zubizuri ("white bridge" in Basque), perhaps better known as his Campo Volantin Footbridge. And the news, just in, is that he has won. He's the designer, and no, it can't be altered without his consent. 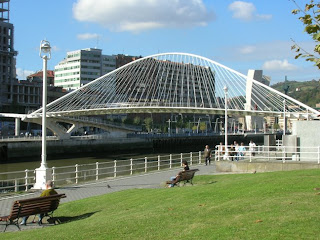 Opened in 1997, the arch footbridge (pictured left), spanning 75m across the Nervion River, is one of Calatrava's most iconic works. It has had its problems - the footway is inset with glass bricks which can be slippery with wet, and the local council has reportedly spent 250,000 euros replacing them when they break, as well as dealing with claims from injured bridge users.

In 2006, a new and substantially less attractive footbridge link was added at one end of the Zubizuri, in order to provide a better connection to the new Isozaki towers. The new link bridge can be seen here and here (and below). While it's undoubtedly totally out of keeping with Calatrava's design, it does serve the rather useful purpose of providing a direct high-level connection where there was previously none.

In 2007, Calatrava sued the authorities for breaching his moral rights to the integrity of his artistic work, arguing that this alteration represented derogatory treatment of "his" bridge. He complained both about the attachment of the new bridge, and about the removal of a short section of balustrade. He sought either for the new link bridge to be removed (and to receive 250,000 euros in moral damages), or if it were to remain in place, to receive 3 million euros in damages, a sum that must have several other bridge designers wondering how they can tap this unlikely new source of income.

Bilbao argued that there was a common public interest in extending and modifying the bridge, and that this superseded Calatrava's rights.

In November 2007, the courts decided that although the designer's moral rights had indeed been breached, no damages were due. Calatrava appealed. 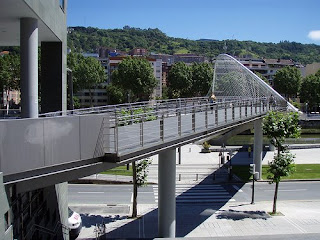 Now, Calatrava's appeal has been upheld, and while Bilbao will be allowed to keep their footbridge extension (pictured left, courtesy of Daquella Manera on flickr, as is the image below), they have to pay Calatrava damages. That link suggests 300,000 euros are to be paid, but in fact it's only 30,000 (Spanish readers can find the full court decision online). What's clear is that while the Spanish courts have very firmly upheld Calatrava's right not to have his bridges tampered with, they've also very firmly rejected his estimation of the extent of damage caused. Nonetheless, building owners throughout Spain will probably be reeling from the judgement, which opens the way for any architect to seek damages any time their work is altered.

So, what are these "moral rights"? They relate to the ability of an artist to control the fate of their works. Essentially, they prevent owners of a work of art from altering it, which I guess is a useful protection to have.

In the USA, moral rights are primarily available for visual art - certainly not for buildings. 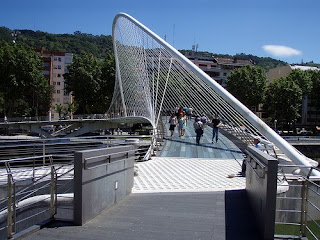 In the UK, moral rights are enshrined in the Copyright, Designs and Patents Act of 1988, which includes buildings as "artistic works". Artistic works are protected against addition, deletion, alteration or adaptation, where this distorts or mutilates the work, or harms the creator's reputation in any way. Luckily for building owners in the UK, however, the Act specifically excludes buildings from protection against derogatory treatment (clause 80(5), for those who care), so it appears that the Calatrava case couldn't happen here.

In reality it's not quite that simple. A detailed account of the Calatrava case at WIPO magazine suggests that the Spanish intellectual property law doesn't clearly offer any protection to works of architecture, implying that the courts are setting an important precedent by expanding its interpretation. All national legislation in this area has its source in the Berne Convention, which does explicitly include works of architecture, and explicitly provides protection against distortion, mutilation or other derogatory treatment.

So it's far from unreasonable to conclude that this may not be the last time a bridge designer sues to protect the artistic integrity of their work. Bridge owners everywhere, beware! And homeowners, especially in Spain, think twice before having that extension built ...

A footbridge should be held for public interest instead of the designer personal intellectual property. Authority should take precaution to prevent this happen again!

I partly agree. The designer's moral rights are recognised world wide through the Berne Convention, and if it was one of my bridges that had been disfigured in this way, I'd be pretty unhappy. In one sense, the moral rights protect new designs of artistic merit in the period before they can be protected by heritage legislation: so in the UK, you can't modify an older footbridge without permission once it receives a listed heritage designation from the government. New bridges can be butchered however the owner wishes.

Having said that, I agree that for a publicly owned structure, the public interest should win out. It's not impossible that Spain will consider fresh legislation to change how this operates in the future, either by exempting buildings from the current law, or by allowing creators to waive their moral rights (in which case, every designer's contract would in future include such a waiver).

The real root of the problem is not the legislation, but Bilbao's architecturally insensitive alteration. If they'd either brought Calatrava back in, or at least designed something in keeping with the style and layout of his bridge, they may not have ended up in this situation.

The process of developing and refining a design is a continuous one, and in modern designs it seems that the point at which the design is 'fixed' is set by political or financial deadlines rather than the designer reaching a natural conclusion. When a design is built, it’s rarely ‘finished’ and I worry for any notion of preserving a design in perpetuity.

To take the Calatrava example, re-surfacing the slippery surface to make it safer appears now to be impossible, as maintaining Calatrava’s original ‘drawing board’ vision of glass blocks (however impractical they turn out to be in practice) is deemed more important than allowing the user to revise the design based on their experience of failures in the finished product.

Your house analogy is a good one. A designer is employed like any other professional to advise the client. To enshrine the designer as having a status that persists once their service has been contractually rendered provides a worrying precedent!

I'm not sure to what extent the glass block decking played a part in the final judgement in this case, which seems mainly to have focussed on the addition of the link bridge.

In Venice, Calatrava volunteered to consider modifications to his footbridge in response to complaints about steps acting a trip hazards, so he is not entirely averse to pragmatic improvement.

Stewart Brand's book "How Buildings Learn" would make a good read for anyone who thinks a designer's vision should be immutable and unresponsive to changing needs.

From the linked WIPO article:
"In the conflict between these private and public interests, it was the moral rights of the architect which lost."

So things like slippery tiles can apparently still be replaced. But all is subject to change on appeal...