From Salginatobel, we drove south towards Klosters and by far the biggest bridge on the study tour. Christian Menn's Sunniberg Bridge is, to my mind, his finest work, and since its completion in 1998, it has been a major landmark in the Landquart River valley. 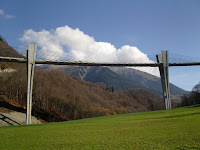 The bridge is part of the Klosters bypass scheme, but at CHF 17m, its cost is dwarfed by the CHF 345m cost of the 4km long Gotschna Tunnel, which the highway enters at the south end of the bridge. Nonetheless, the bridge design was (rightly) chosen in place of a cheaper box-girder option because of the environmental sensitivity of the landscape.

Bizarrely, the bridge was opened seven years after completion, in 2005, by Prince Charles, that notorious foe of modern architecture. Prior to opening, the bridge had provided the construction access for the tunnel works. I find it hard to imagine the opening ceremony: "Yes, one is proud to open this monstrous carbuncle if it makes it ten minutes quicker to get to one's skiing holiday." 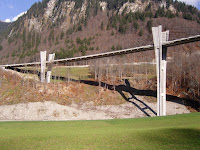 Approaching the bridge from the south, we drove down towards it from higher in the valley. From here, the bridge looked small, minimal, barely present in the landscape. It was only once we approached it from ground level that its scale became apparent. 526m long, 12m wide, with a longest span of 140m, and pylons up to 77m above ground level, it's a bridge on the heroic scale. 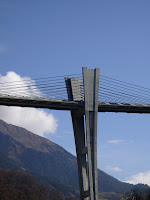 Menn's adoption of the extradosed bridge form allows the deck to be more slender than in a conventional box girder bridge (because it's supported by cables from above), while the overall bridge doesn't compete unduly with the mountain landscape (because the cables are at a much shallower angle than a conventional cable-stayed bridge). The extradosed bridge is really a special case of a post-tensioned bridge, where the cables are lifted out of the deck to allow the overall bridge deck to carry higher bending moments and shear forces at pier positions. Essentially, it's more complex and expensive than a post-tensioned bridge, but less efficient than a normal cable-stayed bridge. But when done well, it can certainly look very impressive indeed. 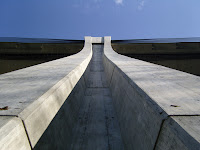 The bridge was designed without any expansion joints, which means that under temperature variations, the deck "breathes" in plan i.e. sways sideways. The piers are designed with relatively slender bases to be flexible enough to withstand this movement, and along with the need to maintain highway headrooms, this leads to their distinctive and elegant Y-shape. Everything about the piers and pylons is well thought out - their gentle curves, echoing the tall trees nearby; the way the bridge deck nestles between their arms; their continuity (many cable-stayed bridge have very different pylon forms above and below deck); the clever way the massive steel cable anchorages are hidden within them; and their delicate but robust proportioning. 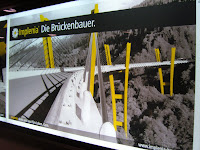 Unfortunately, we spent so much time tramping around admiring the bridge from below, that we had no time to stop at deck level. However, a pretty good idea of the appearance can be found from this advertising poster, which I spotted when arriving at Zurich airport. Good to see the Swiss pride in this monument to engineering heroism.

Later in the day, we'd see one of Menn's concrete arch bridges at Viamala gorge, but it wasn't really flattered by the viewpoint, and certainly didn't compare well to Sunniberg. Sunniberg Bridge is a proper engineer's bridge - all the key elements of the design have a sound technical rationale, but the combination of choices made and the way they are each worked out is absolutely exquisite.

I read that after WW2 all Swiss road tunnels and bridges are built with explosives embedded in structurally important points. Did your hosts mention this, admittedly unconfirmed, fact to you?

It is possible that even Maillart's bridges could have been retro fitted with explosives.

Do you know if engineers and architects have to include explosive "alcoves" into the design, if so this must me rather hard to countenance.

I believe this is generally correct, that explosives were placed in key structures during or following WW2, including in several Maillart bridges. But I don't believe they normally do so any more.