Frowning at the Dubai Smile

Another quick interruption to the ongoing Swiss bridge reports - I just couldn't let this one pass!
It's another "iconic" bridge. And in Dubai, home to the world's greatest Competitive Extravagance Championships. Care to guess whether it's a structurally sound idea or not?

I have to admit, I'm always in two minds about some of the crazier bridge schemes which seem to be in vogue at present. On one hand, everything in my sober engineer's analytical heart yearns for designs which, like the Swiss masterpieces I'm currently covering, achieve aesthetic excellence by exploring an imaginative engineering concept with integrity and courage. On the other hand, I understand intellectually that in the age of post-modernist excess, there are other yardsticks by which a structure can be judged, particularly if (as in this case) it's just an excuse to erect a giant logo-as-sculpture, Sheikh Maktoum's equivalent of the McDonalds golden arches.

So, the Dubai smile. Dubai has just announced its chosen design for a seventh crossing of the Dubai Creek, following competitive proposals submitted by a variety of "specialised global companies" (none of whom are named - not even the winner - so if anyone knows who they are, please share). The new bridge crosses a 400m wide waterway, and according to one story it replaces the existing Floating Bridge, quadrupling the current traffic capacity. I hope that story has it wrong, because the Floating Bridge was only built last year! 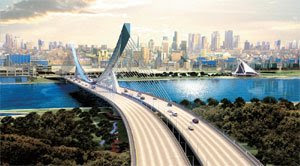 The bridge deck is suspended from a 100m tall inverted arch (see illustration, although there's a better image here), apparently for the sole reason of creating a welcoming smile for visitors to admire. It certainly doesn't make any structural sense, as the enormous back cantilevers have to carry the weight of 12 traffic lanes in unassisted bending. Essentially, the bridge is a bit like a conventional suspension bridge (the easier way to achieve a smiling appearance) except with the support towers in completely the wrong place.
It has more in common with cable-stayed bridges with the backstay missing (e.g. Alamillo Bridge or the unbuilt River Wear Bridge), except it seems to have been consciously arranged to be even more structurally inefficient. What's especially disappointing is that it could have been made much more efficient fairly easily by stringing a few more cables horizontally between the twin cantilevers.
At 61m wide and (at a guess) about 500m long, the bridge is intended to cost 810 million dirams, which is about £147m. That works out at £4,800 per square metre of deck, which is not inappropriate for a "normal" landmark bridge but is well below the going rate for a structurally inefficient design. I don't know whether the availability of a large pool of poorly treated immigrant labour from India and Pakistan helps get the costs down or not.
Returning to my dilemma, I think it's fairly easy to take a view on this one. I can't find anything to smile about in the Dubai Smile. There's no structural rationale whatsoever, and it will be monumentally difficult to build as a result. It may be a topsy-turvy arch to fit into Dubai's topsy-turvy Alice-in-wonderland world, but essentially it's just plain old kitsch. I can see the puritan faction amongst bridge designers starting a Campaign for Real Bridges right here.
Posted by The Happy Pontist at 12:15 PM

I believe that the bridge make no sense in term of structural efficiency. The firm who work out this bridge concept is just for the sake of getting job!