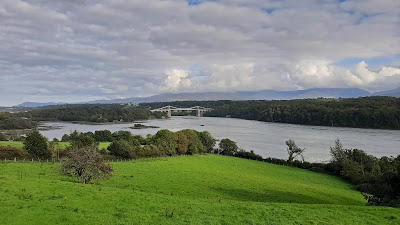 Where do you start when trying to write a simple blog post about a bridge like this? So much has already been written (see links at the end, which are selective and do ignore some of the more detailed publications)!

The first serious proposal for a bridge over the Menai Strait came in 1802, when John Rennie proposed a multi-span viaduct of masonry and cast iron. A few years later, in 1811, it was Thomas Telford's turn, presenting designs for either a multi-span cast iron viaduct similar to Rennie's or for a single cast-iron span. Neither of these ideas were adopted. 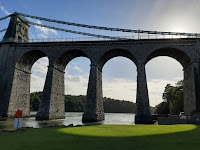 Telford revisited the site in 1818, and prepared plans for a suspension bridge instead. Construction work began on 10th August 1819, three years ahead of Telford's suspension bridge at Conwy. Both bridges were completed in the same year, 1826.

The bridge at Menai became the longest bridge span in the world, its 577 feet length exceeding the 449 feet of Samuel Brown's Union Chain Bridge, completed six years earlier in 1820. Brown's bridge had commenced construction only a few days before the Menai bridge, on 2nd August 1819, but was built much more quickly than Telford's bridge.

Menai Suspension Bridge held the span record for 8 years before being overtaken by the 889ft Fribourg Suspension Bridge, in  October 1834, a month after Telford's death. It's maybe worth noting as a historical aside that the Union Chain Bridge's earlier record is attached to some degree of doubt: the 1430 Chushul Chakzam footbridge in Tibet may have been a very similar span, although records are poor.

The Menai Bridge's span was a remarkable achievement, and if it isn't Telford's finest bridge, I think it's the most substantial engineering challenge that he ever took on. 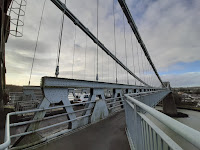 Telford had been looking at suspension bridge ideas since 1814, when he was commissioned to develop a proposal for a road bridge at Runcorn. That design was for what would have been an astonishing 1000ft span, something that would not be achieved on any bridge until 1849. Telford proposed to form the Runcorn bridge's catenaries out of half-inch square iron bars, welded and bound together into sixteen "cables" each comprising 36 such bars. He arranged for extensive testing of the strength of iron to inform the design, and built a model suspension bridge 50ft long. 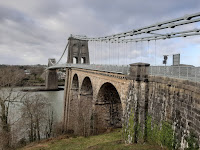 The promoters of the Runcorn crossing invited others to submit designs for review by Telford. The only submission to meet his approval was a suspension bridge proposal from Samuel Brown, who proposed catenaries comprising iron chains. Telford visited Brown's factory in February 1817, where he was driven across Brown's own model bridge, albeit quite a substantial model some 100ft in span. At the time, Brown was working with chains made from iron rods, as he was to use for the Union Chain Bridge, although he also developed chains made from flat iron plate. 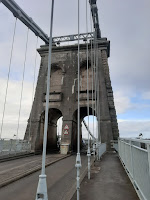 The Runcorn bridge was never built, but when invited to develop the Menai crossing, Telford at first continued with his idea of square iron bars welded and bundled to form cables. Perhaps he was influenced by Brown's patenting his own chain bridge ideas in mid-1817. It was only later, as work proceeded on the masonry parts of the Menai bridge that Telford switched to flat-bar chains, supplied by William Hazledine. There were to be sixteen chains in total, with four groups of four chains arranged vertically above each other; one group at each edge of the bridge, and two on the centreline of the roadway. There is a good image showing the original suspension arrangement at Wikimedia Commons.

Incidentally, it is sometimes claimed that Telford sought permission from Sarah Guppy to use her 1811 patent for suspension bridges. Guppy's patent appears to have been for a catenary bridge, with the decking laid directly onto the suspension bridges, not for the type of bridge that Brown and Telford pursued. There seems to be little substance to this claim, but Telford certainly did rely very much on the assistance of others. Examples include learning from Brown's success in pioneering the use of iron chains; Hazledine's manufacturing capabilities; Telford's right-hand engineer William Provis; Peter Barlow's advice on the strength of iron; and Davies Gilbert's understanding of the mathematics of the catenary. 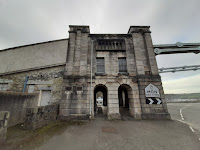 Telford's bridge encountered problems almost as soon as it was complete. Strong winds caused damage to the timber deck and to the hanger bars just one week after it opened. Remedial works were completed, but a storm in 1836 caused huge oscillations and significant damage, and then in 1839 another storm left the deck in ruins and the bridge impassable. Provis was employed to design a stronger, heavier deck.

Issues with wind on suspension bridges were by no means unique to Menai. Similar issues occurred around the same time on Samuel Brown's South Esk Bridge in Montrose, and wind-induced oscillation was also observed at Gattonside Bridge. Telford had not been unaware of the issue, and before the bridge was complete he was reported to have considered stiffening the deck with trusses, deciding eventually that if ever required, they could be retrofitted. The Menai Bridge was a giant engineering prototype, and as with any experiment, its performance was never entirely foreseeable.

The strengthened bridge lasted until 1893, when a new steel deck designed by Sir Benjamin Baker was introduced, largely to resolve problems with the deteriorated state of the timber deck. Further investigation and remedial work took place on several occasions before a decision was made that the bridge could no longer safely carry the loads required.

Between 1938 and 1940, the metal parts of the bridge were completely reconstructed, to a design prepared by Sir Alexander Gibb and Partners, and consultant Guy Maunsell. If the work had not already been underway, it's impossible to imagine it would have started once the Second World War began, given the quantity of steelwork involved and other demands for skilled labour. In any event the bridge was completed, but Maunsell was rapidly immersed in the war effort, turning his engineering skills towards sea forts and the concept behind the floating Mulberry Harbours. Due to the needs of wartime secrecy, his account of the Menai Bridge reconstruction was only published after the war had ended.

The masonry approach spans, which are themselves impressive structures, were left unaltered. Works were undertaken on the upper towers to slightly widen the portals through which vehicles pass. The masonry Bridge Master's House at the southern end of the bridge had its upper parts rebuilt to accommodate replacement of the suspension chains.

The suspension chain alterations included reconstruction of the anchorage elements hidden within tunnels at each end of the bridge. Temporary suspension cables were installed at the edges of the structure to relieve the load on the outer chains. The original sets of four chains directly above each other were replaced with sets of two chains directly above each other, with larger links in much stronger steel.

A new deck was constructed below the existing deck, to allow traffic to continue to use the bridge during the works. The existing deck was then removed (one lane at a time), allowing traffic to drive up and down ramps onto the lower deck. Once this stage was complete, the new deck was gradually raised into its final position. The original centre chains were removed entirely, with the only real evidence today of their existence being the empty slots in the face of the former Bridgemaster's House. The new edge trusses were then completed, considerably enhancing the load carrying capacity of the bridge.

I doubt that casual visitors to the bridge see it as anything other than Telford's structure. The profile remains the same, including the strange back-span arrangements where the chains are anchored directly down into the approach viaducts with hanger bars. Given the over-riding need to enhance the traffic capacity of the highway, the reconstruction was a relatively sensitive project. Even retaining chain catenaries was a technologically unusual choice in the mid-20th century: nobody was still building chain bridges at that point in time.

The trusses were foreseen by Telford, and don't mar the overall appearance of the structure, although the tacked-on cantilever footways are narrow and the new parapets feel over-tall. The detailing of the footway widening on the approach viaducts gives the impression that it was always there.

The bridge now provides one of the best viewpoints in the vicinity, and is one of the UK's most significant engineering landmarks. As with many such large bridges, it has come to define the character of the Menai Strait, visually structuring the way that visitors experience the area as well as remaining a key transport link.

Another bridge was built in 1850 to carry the railway across the Strait (later converted to become the main highway in the 1970s), and plans are under consideration for a third crossing. As with the Forth in Scotland, the prospect of a "family" of bridges is enticing, although it is too early to tell whether the new plans will be as visually successful. 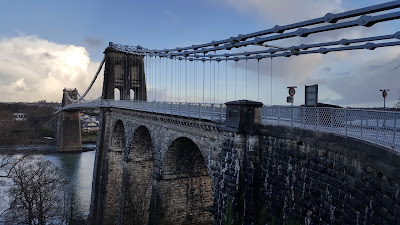