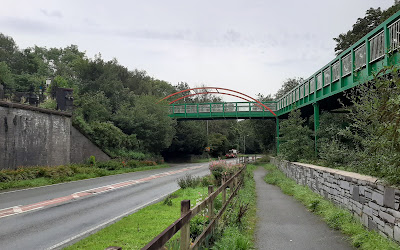 Not far from the Britannia and Menai Bridges, the dedicated pontist may happen upon this lesser-known footbridge.

It carries the Lôn Las Ogwen, a walking and cycling route, over the A4244 highway. The trail follows the line of the former Penrhyn Quarry Railway, which was closed in 1962.

The footbridge diverts from the original line of the railway, presumably to allow a small railway junkyard to be preserved on the south abutment of the original railway bridge.

I don't know who designed the bridge, possibly local consultancy YGC, but it was fabricated by D. Hughes Welding and Fabrications, and built by contractor Mulcair Ltd. At a guess, the main span probably doesn't exceed 20m.

At first glance, it's a steel arch bridge with a rather chunky looking parapet, decked out in the patriotic Welsh colours of green, white and red.

A second look makes clear that it is, as the fabricator says on their website, "a Vierendeel Construction with a Decorative Arch".

Opinions on this may vary. Some may note that it is just another in a long line of fake arch bridges, and hardly as egregious as some examples. Others may wonder if the emphasis on superficiality over substance combines with the colouring to act as a sly post-modern comment upon the inherent hollowness of nationalism.

I'm not sure I would go that far, but I can say that I don't like it. 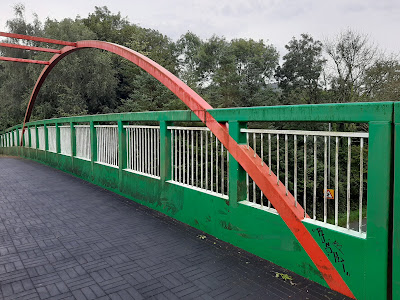